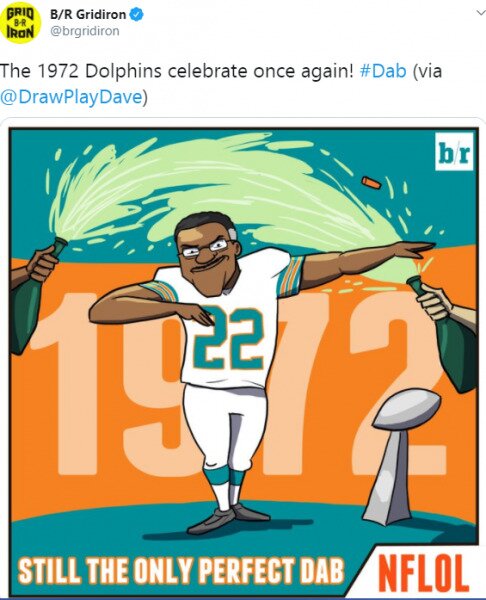 Whether it’s true or not, one of my favorite NFL urban legends is that members of the 1972 Miami Dolphins’ perfect season pop champagne after the last unbeaten team falls every year. As we know, the 2007 New England Patriots’ pursuit of perfection fell one game short no thanks to David Tyree’s helmet catch. However, we know Mercury Morris is on stand-by, ready with his ginger ale or whatever, to celebrate this fall. Online sportsbook Bovada has posted more than 300 NFL season-long prop bets to choose from team touchdown totals to Over/Unders and also which NFL team will be last to lose.

Don’t get it twisted, the Saints’ first four games are no picnic – especially when you consider no team enjoyed any preseason game reps. New Orleans hosts Tom Brady and the Buccaneers’ loaded offense Week 1, have to travel out to Las Vegas Week 2, back home to play the Packers before a trip to Detroit to play the Lions. They’ll be lucky to make it out of September unbeaten.

Speaking of Brady, Bovada set his regular season touchdown total at OVER/UNDER 29.5. He averaged 28.3 passing touchdowns his last three seasons with the Patriots. However, there’s a reason the OVER 29.5 is favored at -150, or 60 percent implied probability, and that has to do with a supporting cast of Mike Evans, Chris Godwin, Rob Gronkowski and under-the-radar slot receiver Scott Miller. Evans and Godwin combined for nearly 2,500 yards and 17 touchdowns last year with Jameis Winston. Brady may not be in the prime of his career, but if his precision passing remains above-average, he’ll cruise to hit this OVER.

Another new face in a new place, DeAndre Hopkins was traded by Houston general manager/head coach Bill O’Brien to the Arizona Cardinals in exchange for running back David Johnson. The addition of D-Hop, arguably a top three receiver on any given week, provides Kyler Murray another reliable target when paired with the cagey veteran, Larry Fitzgerald. Hopkins averaged 1,371 yards his final three seasons with Deshaun Watson. However, the stat you need to know before you place this bet is that Hopkins racked up 1,500+ receiving yards back in 2015 with Brian Hoyer and Ryan Mallett behind center. Murray’s gotta be better than that duo, right?

Depending on how you view his injury history, we’re either on Cam Newton 2.0 or 3.0 with his fresh start in New England. With a sub-optimal receiving corps, one would assume that Bill Belichick will allow his new quarterback to call his own number as he did down in Carolina. In 30 games between 2017-18, Newton averaged 621 rush yards per season. So, whether or not Newton exceeds 549.5 comes down to how much Belichick wants to protect his quarterback, while at the same time keeping an eye on the 2021 NFL Draft, where he’ll no doubt look to add another QB.

After 16 seasons, Philip Rivers said goodbye to San Die, err, Los Angel, err, whatever. The sidearm slinger will likely finish out his NFL career as a member of the Indianapolis Colts. Known for passing into traffic and/or winding up and chunking it down field, coaches know the risks that come with Rivers behind center. He threw 20 interceptions last season and 22 back in 2016, sandwiched in-between were seasons of 10 and 12 interceptions, respectively. So, it’s assumed that Rivers will throw double-digit picks this season. I just can’t get the image of Rivers going deep to T.Y. Hilton and under-throwing him each and every time.

San Francisco’s Nick Bosa was on pace last season to break Jevon Kearse’s rookie record for quarterback sacks, but fell 5.5 short. Kearse’s mark of 14.5 set back in 1999 will be tested once again by Washington Football Team’s top pick, Chase Young. With how often one expects the WFT defense to be on the field this year, it’s reasonable to expect the former Ohio State pass rusher to easily surpass 8.5 sacks by mid-season this year. Take the OVER!