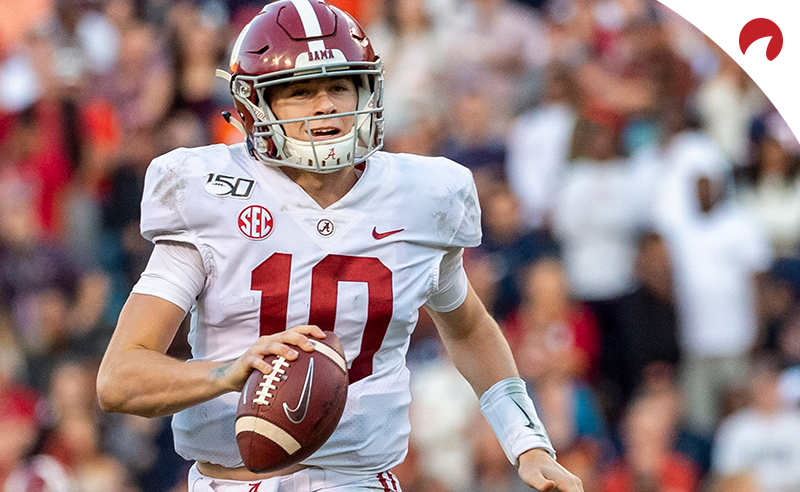 The Alabama Crimson Tide remain the favorites in 2021 college football national championship odds, as they have been for the past few weeks. Their ascension coincided with Clemson’s loss at Notre Dame on November 7 that knocked the Tigers off the top of the odds list for the first time since last year’s national championship game.

Despite Clemson’s defeat to Notre Dame, the Tigers aren’t far behind the Crimson Tide in the national championship odds, sitting one spot back in second.

Online sportsbook Bovada has updated its 2021 national championship odds and has listed Alabama as the favorite at -150. The Tide are followed closely by Clemson at +275, Ohio State at +350, Notre Dame at +700 and Texas A&M at +3500 to round out the top five on the oddsboard.

Odds as of December 15 at Bovada

New to the college football scene? Check out our handy college football betting guide to help you get in the action. Also, keep an eye on our College Football Odds page for the latest up-to-date betting lines.

You had to go all the way back to October 13, 2017, to find Clemson’s last previous regular-season loss, a narrow 27-24 defeat at Syracuse. The Tigers’ long winning streak was snapped when they lost in double overtime at then-No. 4 Notre Dame 47-40 on November 7.

That doesn’t dash Clemson’s College Football Playoff hopes, though, as the Tigers were without standout quarterback Trevor Lawrence due to the coronavirus.

The Heisman Trophy hopeful and projected first overall pick in the 2021 NFL Draft was absolutely on fire prior to his illness. The junior QB had completed 70.7 percent of his passes for 1,833 yards with 17 touchdowns and two interceptions.

Lawrence returned to the lineup in a 52-17 beatdown of Pittsburgh and was terrific in the game, throwing for 403 yards and two touchdowns.

Clemson concluded its regular season with a 45-10 victory at Virginia Tech, setting the stage for a rematch with Notre Dame in the ACC championship game this Saturday.

The CFP committee has the leeway to consider circumstances and overlook Clemson’s loss in its selection process. Now, if the Tigers were to lose in the ACC title game, it may be a different story, but I expect them to win as 10.5-point favorites and be one of the CFP four.

Heading into the opening week of the Big Ten schedule, the Ohio State Buckeyes were second on the oddsboard at +300 and the Alabama Crimson Tide were third at +325. After the Buckeyes stomped Nebraska 52-17 and the Crimson Tide handled Tennessee 48-17, the two teams flipped positions and odds in the table and haven’t looked back.

When Clemson lost, both the Tide and Buckeyes leapfrogged the Tigers into the top two spots on the oddsboard.

However, Ohio State, which was already playing a shortened schedule, had two games postponed due to the coronavirus, leaving the Buckeyes with just five regular-season games played. Any hiccup and their CFP hopes are gone.

Quarterback Justin Fields has been outstanding in Ohio State’s five wins, completing 78.1 percent of his passes for 1,407 yards, 15 touchdowns and three interceptions.

As for ’Bama, it ran the regular season with a 10-0 record, knocking off three ranked foes and winning seven of those games by more than 20 points. The Crimson Tide will collide with Florida in the SEC championship game in what should be a high-scoring affair.

The Tide are 17-point favorites for that game so a loss would be a huge upset. However, I don’t think it would dash their playoff hopes as they are essentially a lock to be one of the CFP four.

That fourth and final College Football Playoff spot looked like it might be determined on conference championship weekend. As it stands, Alabama, Clemson and Ohio State appear to grab the top three spots in some order, and with Notre Dame having beaten Clemson, it would naturally fit as the fourth team.

However, the Fighting Irish and Tigers will collide once again in the ACC championship game and Clemson may be a different team with Trevor Lawrence under center. If Clemson wins big, does that sort of negate Notre Dame’s regular-season victory in Lawrence’s absence? If so, does this open the door for another team to enter the fray?

Florida, led by Heisman Trophy favorite Kyle Trask, appeared to be the fifth team knocking on the door to enter the CFP four and potentially take Notre Dame out. Even though the Gators had a narrow three-point loss to Texas A&M, it looked as though it all would be forgiven. However, Florida closed out the season with an ugly home loss to LSU as a 23-point favorite, which in my opinion essentially scraps it from the conversation.

Perhaps an argument could be made for Texas A&M, posting a 7-1 record with its only loss coming in its second game to Alabama. If Clemson were to lose to Notre Dame again, becoming a two-loss team, do the Aggies deserve to leapfrog the Tigers? I guess if you’re looking for a Hail Mary long shot, the opportunity is there but overall I believe the CFP four are essentially set in stone.

What is a Futures Bet for NCAA Football Teams?

When it comes to big events for any sport, you can bet months in advance. In this case, a futures bet is a wager made on which team will win the national championship. Each week, oddsmakers will update the odds to reflect how a squad is doing. If a team is plagued with injuries, their chances of making it to the NCAA football final game slim down. A surging squad will see their odds skyrocket.

When you go to a college football sportsbook, you’ll see the betting lines laid out like this:

Unlike a traditional straight-up bet where there’s a clear favorite marked by the minus sign (-), ‘Bama is the fave since they have the lowest odds. The rest are considered underdogs.

If you believe that LSU has the greatest odds of winning the championship, and you bet $50 on them, you’d get a payout of $275 – your original $50 is returned along with your winnings of $225. On the other hand, if you’re looking at Georgia and think they’re going to turn it around and win it all, that same $50 would give you $750 – you get your $50 back, plus your prize of $700. Our odds calculating tool will show you how much you’d win based on the odds and amount bet.

When you see futures odds that you like, it’s best to jump on them early. As mentioned above, betting sites will adjust the odds as we get closer to bowl season and teams move up and down in the standings.