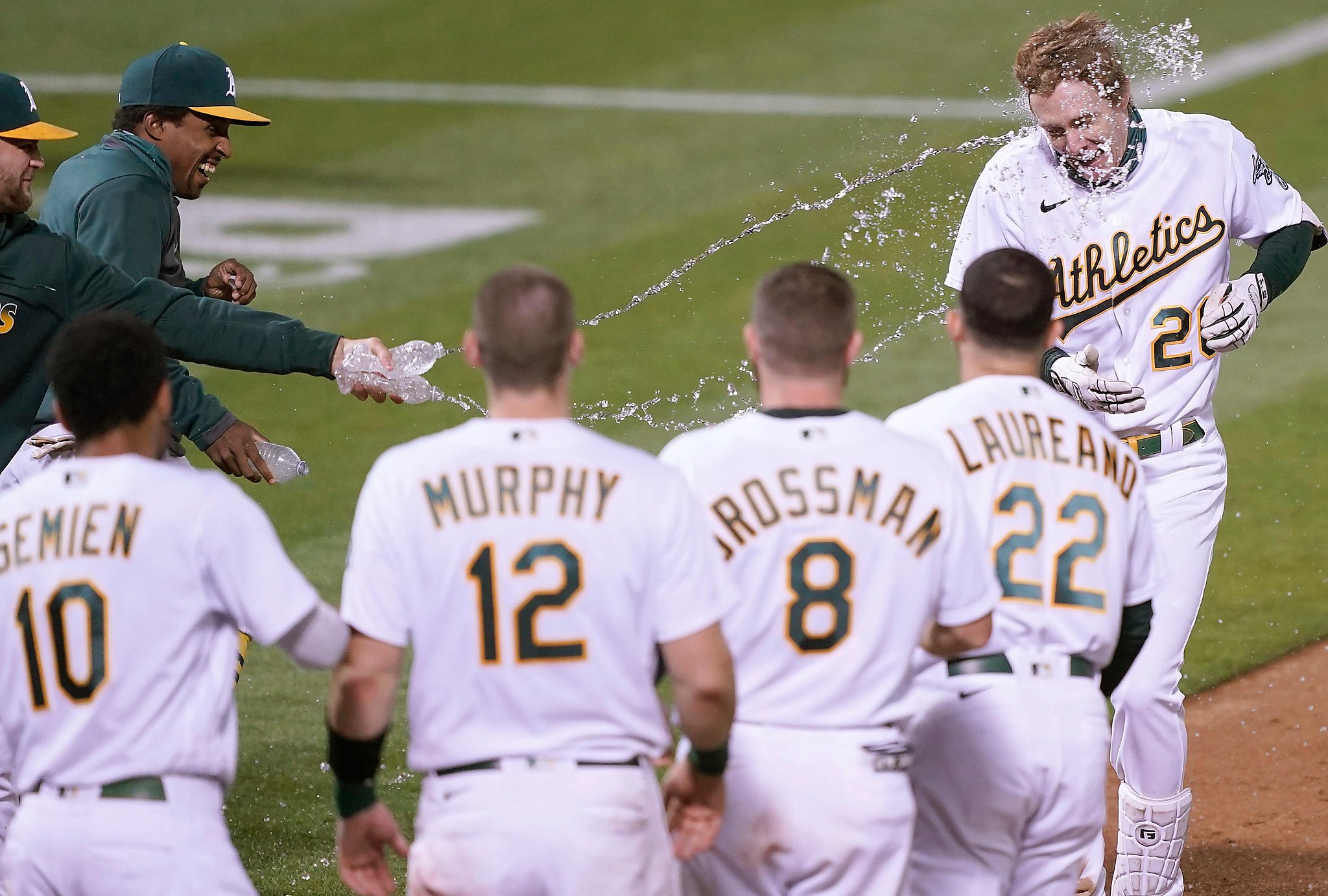 With a first-round series days away, A’s starter Chris Bassitt looks playoff-ready and Oakland’s offense perhaps a bit too playoff-reminiscent.

Bassitt turned in another superb outing Friday night, throwing seven scoreless innings against Seattle, leaving with a no-decision as the A’s squandered early scoring chances. Those were erased, however, as Oakland rallied for a walk-off win the 10th, with Mark Canha’s two-run homer giving the A’s a 3-1 win at the Coliseum.

It was the A’s sixth walk-off win this season — they’re 6-0 in extra innings — and they moved back into the No. 2 seed in the American League playoff field.

“We haven’t been swinging the bat too terribly well,” manager Bob Melvin said. “But when we’re at home and we’re up last, we seem to find a way to really get good at-bats late in the game and win games.”

Under this year’s extra-innings rule, Seattle’s Dee Strange-Gordon was placed at second base to begin the 10th. He moved to third on a flyout and scored on a 3-0 pitch by Jake Diekman that got past catcher Sean Murphy for a passed ball. In Oakland’s half of the 10th, reliever Joey Gerber retired Marcus Semien and Tommy La Stella before Ramón Laureano ripped a game-tying double to score pinch-runner Nate Orf. Canha followed with a home run to right-center. Before Laureano’s double, the A’s had been 0-for-9 with runners in scoring position.

“Crunch time,” Canha said. “We’ve got a lot of guys that are clutch. Ramón’s one of those guys and I consider myself one of those guys. The moment’s never too big for us as a team and that just felt like a lot of the wins that we’ve had this year. We have that kind of special ability to win in dramatic fashion and it’s a good thing to have.”

At this point, Bassitt appears to be a certainty to start in the best-of-three opening-round series beginning Tuesday in Oakland, though the A’s are waiting to learn their opponent to finalize pitching plans. Bassitt allowed one earned run over his final four regular-season starts, with five walks and 25 strikeouts in 26 ⅔ innings in that span. He could pitch Game 2 of the wild-card series Wednesday on regular rest.

“He’s been so consistent for us, you almost expect it out of him,” Melvin said. “Seven innings was plenty tonight with what’s coming up potentially in his next start.”

Added to the rotation in camp out of necessity — had Jesús Luzardo and A.J. Puk been healthy, he might have been in the bullpen — Bassitt finished the season with a 2.29 ERA. He notably had a 0.72 ERA in six starts at the Coliseum, where he would pitch in the first round.

“I felt pretty bad about my fastball last start and then today I felt really good so I’m pretty happy about that,” Bassitt said. “I think I had all pitches kind of working tonight and that’s obviously great going into the postseason.”

As for his playoff role, Bassitt said: “I’m not too worried about that. … This year to the extreme I feel like I haven’t one time worried about stuff that I really cannot control. And I can’t control that so I don’t really give a damn about it. I don’t care when I’m starting. They’ll make the decision that’s best for the team and I’ll go with that.”

After Friday’s games, the A’s were a half-game ahead of the No. 3 seed Twins and lined up for a potential matchup with the No. 7 seed White Sox. Plenty can still change, though the AL’s eight-team field is now set with the Astros securing a spot Friday as the second-place team in the West. Several A’s said they aren’t following seeding closely.

“For us, it doesn’t really matter who we play,” closer Liam Hendriks said before Friday’s game. “Obviously, as a vindictive kind of thing, we want to take out the Astros. But I don’t care who we play as long as we beat them.”

It could require a livelier offense than the A’s have showed recently. Entering Friday, the A’s were batting .194 over their previous 11 games — a stretch reminiscent of their end-of-season funk in 2019 that spilled into a 5-1 loss in the wild-card game. The A’s went 0-for-4 with runners in scoring position in that loss to the Rays. In their 7-2 wild-card loss to the Yankees in 2018, the A’s went 0-for-6 with men in scoring position.

Friday night, the A’s put a runner in scoring position with less than two outs in the second, third and fourth innings and did not score. They were scoreless through eight innings despite hitting five doubles. In the eighth, Seattle left fielder Tim Lopes ran down a Jonah Heim drive with two on and two out to preserve a 0-0 tie. Those were the eighth and ninth runners stranded by the A’s. Such situations have been an issue for the A’s all season — they entered Friday batting .231 with runners in scoring position, 27th in the majors.

Melvin said he thought at-bats were “a little better tonight across the board” and that the A’s “hit some balls hard, just didn’t have much to show for it in big situations.” Canha said the lineup remains a “confident group.