Leandre “Patches” Wharton reportedly was fired soon after the fisticuffs. Players are rallying to his defense with an online fundraiser. 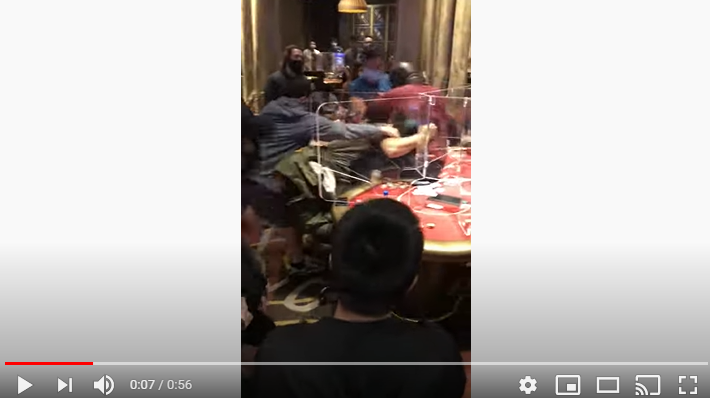 According to unverified witness reports on social media, an unruly player was badgering the dealer before he directed a racial slur at the dealer.

Wharton is one of the more well-known and well-liked dealers in Las Vegas. (I have sat at his table before and personally concur … good dealer, friendly guy.)

The 56-second clip shows Patches, arms locked with an unknown customer, as two other patrons attempt to break up the fight. After the player escapes the dealer’s grasp, Patches gives chase, with chairs falling before other players step in to keep the two separated.

“Relax, relax, relax,” another player pleads in an attempt to deescalate the situation.

Another YouTube video from inside the Aria poker room captures the dealer antagonist trying to explain to casino security what happened. He claims in the 42-second clip that “he attacked me,” and “he started talking dumb at the table,” referring to Wharton.

Wharton hasn’t spoken publicly about the incident, but accounts from inside the poker room indicate the player dropped an n-bomb directed at the dealer.

Poker Community Steps Up for Patches

Word spread quickly on social media that the Aria fired Wharton. In response, Las Vegas resident Keila Amos-Odinas set up a GoFundMe campaign to help the dealer pay his bills amid the fallout from the incident.

“Patches is a veteran Poker Dealer in Las Vegas and a friend to many!!!” says the fundraiser description. “He showed up at work in the middle of a pandemic to do his job as a professional poker dealer… He was berated and attacked and he simply protected himself… All of us have experienced someone who has belittled us at work and we know how helpless that feels… lets do our part to show him we have his back…”

The campaign originally sought to raise $2.500. As of Friday evening, Patches supporters had donated more than $13,000.

UPDATE: As of Sunday evening, the fundraiser had generated more than $22,000.

A $187-donor named Kendall Fukumoto wrote on the GoFundMe page some advice for Patches: “Make this a blessing. One door closes and other awesome doors open.”

Patches is well respected among the Las Vegas poker community. He’s considered one of the best and most experienced dealers in town.

“I work at the Aria with Patches,” Chammi Jennings wrote on Facebook. “He is one of the most easy going, fun loving people I know. I’ve said it from the beginning, it had to be very very bad for him to react like that.”

Wharton’s coworkers aren’t the only ones singing his praises. Numerous players chimed in. “Patches is a sweetheart of a guy,” writes Marshall Silverstein.

“The player should have been 86’d,” Donna Goodwin argues. “Patches should have gotten a raise! What bulls**t.”