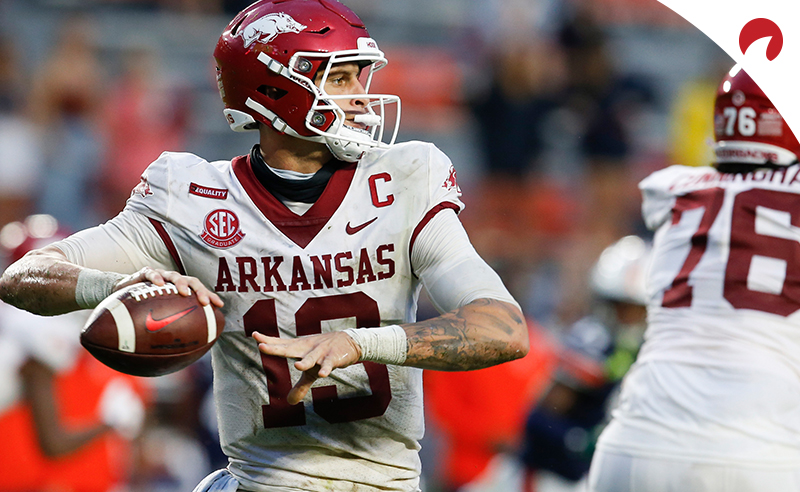 The 2020 college football season has been so good thus far. Sure, some big games have been either canceled or postponed but considering where we were a few months ago, I’m very happy with the action we’ve witnessed. One reason for that, underdogs have been performing well week after week and who doesn’t love a good underdog upset?

I’m looking at three teams that have excelled against the spread as underdogs and the traits that have put them in this spot to outperform.

New to betting on college football? Check out our great how-to bet on football guide to help you get in the action. Also, keep an eye on our college football odds page for the latest up-to-date betting lines.

The biggest surprise of the season, Arkansas is 2-2 in wins/losses but an impressive 4-0 against the spread. Their season win total was 1.5 games with the under as a big -160 favorite and for good reason. 2019 was the second straight year they went 0-8 in SEC games.

So far, Arkansas lost the opening game against a good Georgia defense 37-10 as 28-point underdogs, shut down a Mississippi State offense that produced 632 yards the week before with a 21-14 win as 17-point underdogs, nearly upset Auburn as 13.5-point underdogs, and limited Matt Corral and Lane Kiffin’s explosive passing attack to just 21 points in a 33-21 win as 3-point dogs.

Statistically speaking, the numbers don’t correlate to performance. Of 77 teams, the Razorbacks are ranked 62nd in total offense and 44th in total defense. Their pass rush isn’t particularly impressive either, ranked 42nd with nine sacks to their credit. So, what has made them contend in each of their matchups?

Their weapon: takeaways. They are second best in forcing turnovers, averaging 3.2 takeaways per game. In total, this Arkansas team has forced 13 turnovers: three fumbles and 10 interceptions, including three pick-sixes. Those 13 turnovers, as a result, produced 34 points scored in either field goals or touchdowns.

Their second-best weapon involves limiting opponents on third downs. The Razorbacks are a top 20 team when it comes to their opponents’ third-down conversion percentage, allowing just a 32 percent rate. Despite losing 37-10, they even held Georgia to a 30 percent conversion. Ole Miss, a team that had been in shootouts for three straight games, was limited to 20 percent in converting on the important third downs. Where this team lacks statistically, they make up in-game spots that matter.

The Razorbacks are likely to continue coming in as the underdog with upcoming matchups against Texas A&M, Florida, LSU, and Alabama next but don’t rule them out.

The Chanticleers have been a popular underdog bet and for good reason. They’re actually good! What head coach Jamey Chadwell has done with this team is impressive. They went 5-7 both in 2018 and 2019, but and are a perfect 4-0 this season.

They topped Kansas 38-23 as six-point underdogs, impressively defeated Arkansas State 52-23 as 3.5-point underdogs, and beat the Louisiana Rajin’ Cajuns 30-27 as 9-point dogs. What do they have going for them this season? For one, a much-improved pass rush. Last year, they ranked 91st in sacks per game. The Chanticleers are in the top 25 this year, producing three sacks in two of their three games where they were the underdog.

That improvement has also led to takeaways. They are 17th in takeaways per game, producing six total turnovers in those three games, two fumbles and four interceptions. Aside from their defense, though, this Coastal team also has a really good run game.

They are 18th in total rushing yards and 36th in yards per rush attempt. They have three running backs to utilize including their leading runner in CJ Marable, who has four touchdowns on the season. Quarterback Grayson McCall, 67.8 percent completion, is also a bit of a dual-threat, with 184 rushing yards to his name.

I went a little further down the list for this one but I think this Tulsa Golden Hurricane team may be really underrated. They lost their opening game to Oklahoma State16-7 as 24-point underdogs.

Yes, Cowboys quarterback Spencer Sanders left that game early with an injury but they still limited star running back Chuba Hubbard to 93 yards, just 20 long, and one touchdown. They forced three field goals in the red zone. They also pressured the quarterback with six sacks and forced two turnovers.

They then defeated UCF 34-26 as 21-point underdogs. UCF is a team that is first in total yards per game averaging 636 yards and they were held to 455 against Tulsa. UCF’s Dillon Gabriel is a top ten quarterback averaging 9.3 yards per pass and yet he was limited to 6.5. The UCF run offense couldn’t really get going, as they had just 125 rushing yards in the game and 3.7 yards per rush when they average 4.6

Tulsa had just one sack but forced three turnovers. This defense is not one to be underestimated and though it is just two games played, they were against two of the better teams in the country.

Keep these three teams in mind the next time you find them as underdogs on college football gameday. They could be a good grab ATS with underdog moneyline value.