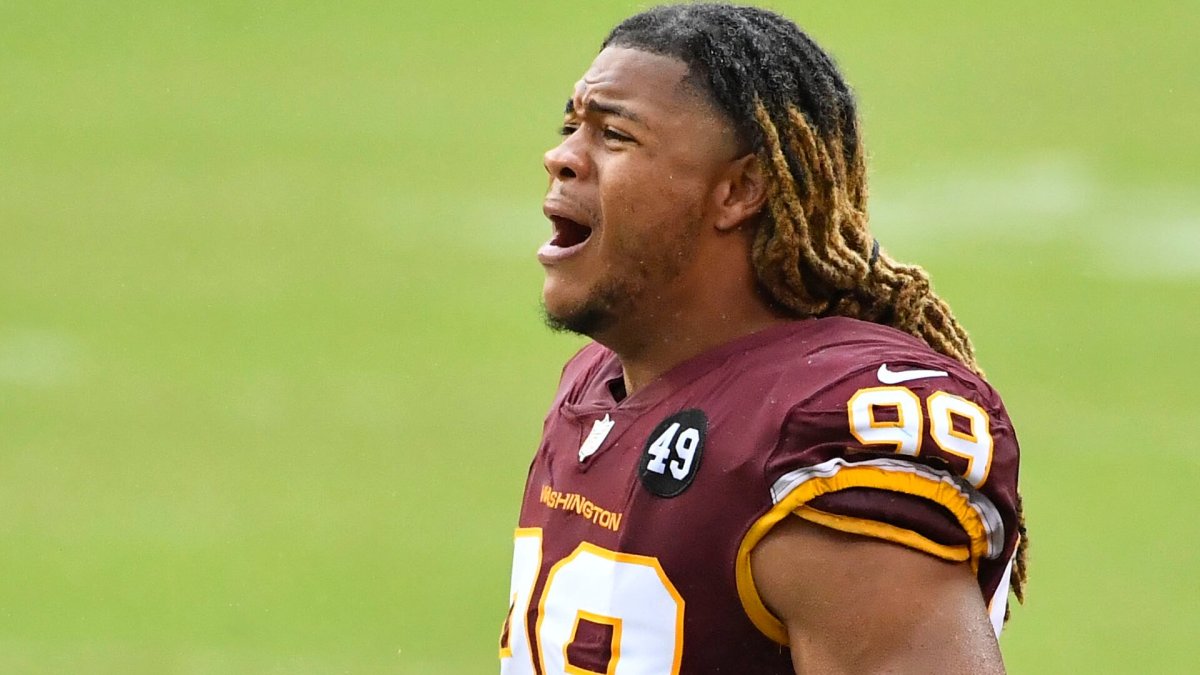 When the 2020 season began a look at the Washington Football Team’s roster revealed that the defense needed to carry the squad to wins.

Through seven games, that’s largely been the case.

When the Washington defense plays well, the team has a chance to win. When they don’t, the results suffer.

In two wins this season Washington has posted 14 sacks and given up an average of 10 points-per-game. That’s strong.

In five losses, the Washington defense has given up at least 30 points four times. That’s not strong.

Washington’s leadership is driven by defensive coaches in Ron Rivera and Jack Del Rio. It’s reasonable to assume the defense will improve over the second half of the season, but it’s also somewhat surprising where the defense ranks right now.

Dont look now but the Washington Football Team defense is ranked 11th in points allowed and 4th in yards allowed.

Considering those numbers, clearly some of Washington’s defensive players deserve high praise. What about the entire unit? Let’s take a look:

Washington Defense: C – The numbers might suggest a top 10 unit, but no team at 2-5 that gave up 30 or more in four of seven games can get better than a C-. While the pass defense ranks top in the league in yards allowed at the halfway point, the run defense ranks 29th. And some of these numbers are boosted by a dominant effort over a terrible Dallas team in Week 7. Zero apologies about that, all Washington can do is play the teams on their schedule, but look deeper than the numbers.

Kendall Fuller: A- – Washington signed Fuller to a big-money contract this offseason, and he’s delivered. Four interceptions in five games and his presence has stabilized the Washington secondary. His versatility is a key too, and he could end up playing more safety as the season goes on. The only negative is that he missed two games with an injury.

Chase Young: A- – The No. 2 overall pick has delivered on all the hype, especially in an explosive season opener with 1.5 sacks and a dominant performance over the Eagles. Young missed most of two games with a groin injury, which follows missed time during training camp with a hip flexor issue, but looked healthy in Week 7 against the Cowboys. Del Rio talked glowingly about Young, saying he’s a “great” player and that his line play is opening things up for other players on the defensive line like Jonathan Allen and Montez Sweat. Sweat has been really good too, maybe even deserving another A grade.

Defensive line: B- – It’s easy to get excited about Washington’s 22 total sacks, but 14 of them have come in two games. And the struggles in the run are well documented. In their five losses Washington has given up at least 129 rush yards.

Linebackers: C- – Both in coverage and in the run game Washington’s linebackers have not gotten it done. The return of Cole Holcomb from injury could boost this group quickly as he played great against the Cowboys in Week 7, logging a sack and an interception. Jon Bostic and Kevin Pierre-Louis have played like journeymen, and veteran Thomas Davis hasn’t gotten on the field too much.

Secondary: C – This one is tricky because the numbers are the numbers and Washington is tops in the NFL in pass defense at the season’s halfway mark. Fuller has played well. But this team has also given up nine plays of 40 yards or more, among the worst in the league. It also needs to be pointed out that the Washington pass rush helps in the pass game a lot. Keep in mind too that while Landon Collins wasn’t playing well before an Achilles injury, the depth at safety will take a hit with him out. Expect to see much more of rookie Kam Curl in the back of the Washington defense paired up with Deshazor Everett. That will keep Troy Apke on the bench most likely.