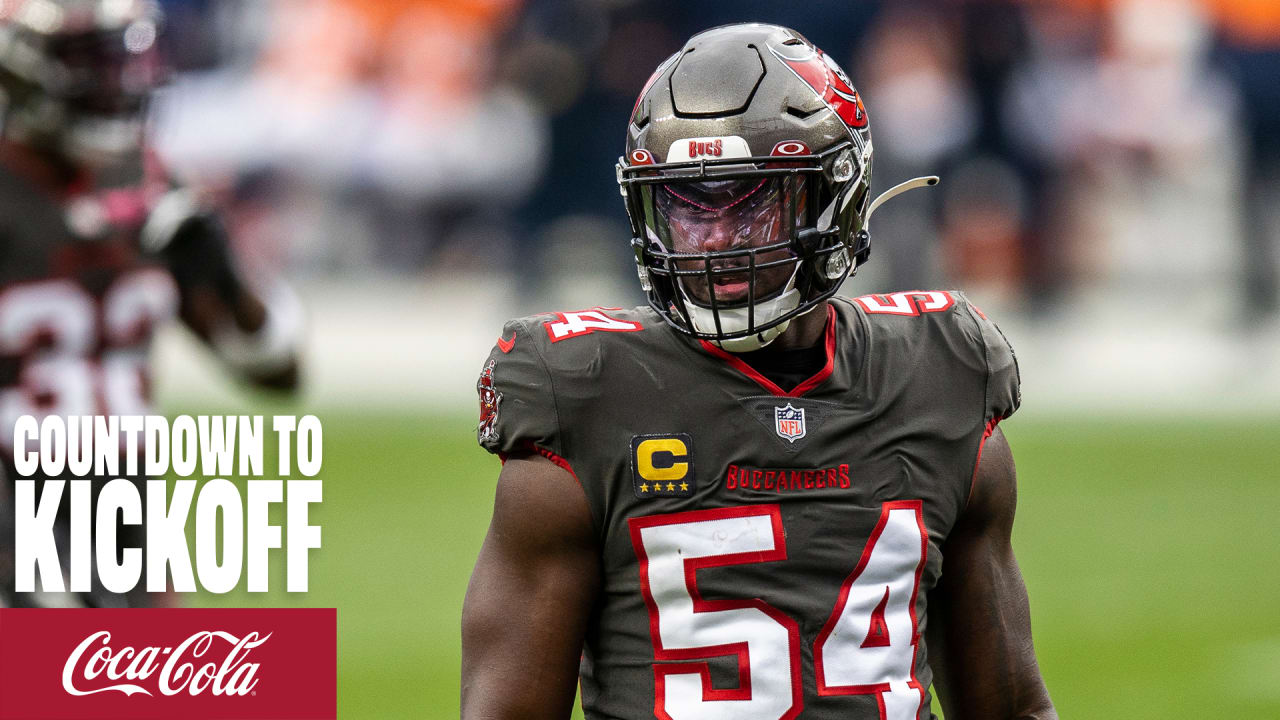 The Tampa Bay Buccaneers take on the Los Angeles Rams on Monday night, and we’re counting down the hours to the 8:15 p.m. kickoff at Raymond James Stadium. After a week of preparation, here’s what it all comes down to:

C/G ﻿Ryan Jensen﻿ . Whether he plays center or left guard – which is dependent upon the availability of Ali Marpet, who is considered doubtful – Jensen will continue to play a key role on a line that has allowed the fourth-lowest sacks per pass play figure in the NFL this season. And maintaining that level of protection for Tom Brady will be critical in getting the Bucs to eight wins, because Tampa Bay is 7-0 this season when Brady is sacked two or fewer times, and 0-3 otherwise. Wherever he’s lined up, Jensen is sure to get action against two-time Defensive Player of the Year Aaron Donald, who may be on his way to a third such award. That may be a one-on-one competition, or an attempt to double-team Donald to keep him from wreaking havoc in the backfield. Jensen will also be crucial to helping the Buccaneers establish the running game early, something they made a point of doing against Carolina, with very pleasant results. Ronald Jones probably would not have been sprung for his record-setting 98-yard touchdown run if not for a key second-level block by Jensen. And while it’s not always easy to isolate one particular offensive linemen for specific viewing, Jensen can be fun to watch because he plays with a high level of intensity to the last echo of the whistle.

CB ﻿Sean Murphy-Bunting﻿. Earlier this week, Head Coach Bruce Arians said that the Buccaneers’ second-year cornerback “got his swagger back,” and that’s a good thing for Tampa Bay’s defense. Arians was very pleased with Murphy-Bunting’s performance against the Panthers, as he helped contain shifty receiver Curtis Samuel as the Buccaneers held Teddy Bridgewater to 136 passing yards. Murphy-Bunting began the season as the starter opposite Carlton Davis in the Bucs’ base defense, moving inside to the slot when the defense shifted to nickel. However, Jamel Dean eventually replaced Murphy-Bunting in the starting lineup, making the latter strictly the nickel corner. Arians now says he has confidence in either one as the starter on the outside, but more importantly Murphy-Bunting’s improved play gives the Bucs’ defense a chance to stifle opposing offenses with three strong cover corners. Whether he starts or not, Murphy-Bunting will remain the top slot corner, which means he’s going to be busy this week against the Rams’ leading receiver, Cooper Kupp. Kupp plays almost exactly two-thirds of his snaps either in the slot or lined up tight against the line, and he’s been the league’s second-most productive pass-catcher out of the slot since the start of last season. The Rams use a lot of pre-snap motion and crossing routes, so as Defensive Coordinator Todd Bowles said, Murphy-Bunting and the rest of the Bucs’ defenders will need to be “disciplined with their eyes.” A newly-confident Murphy-Bunting has a big challenge this week but the Buccaneers are confident he can handle it.

WR ﻿Mike Evans﻿. In addition to getting the ground game going early, the Buccaneers also clearly made a point to get the ball into Evans’ hands against the Panthers. He had a team-high 11 targets in the game, and his line of six catches for 77 yards and a touchdown could have been even more robust but for a few near-misses on big plays. Evans is finally running and cutting free again after spending much of the middle of the season gritting through a nagging ankle injury, and Brady will likely lean on him more and more down the stretch, even with all of the Bucs’ talented offensive weapons. In fact, that deep cast of pass-catchers is very much a good thing for Evans, who didn’t see much double-team against the Panthers and showed what he could do when spending an afternoon (or evening in this case) battling a cornerback one-on-one on every route. Evans’ size and strength makes that a difficult proposition for just about any cornerback in the league. Of course, this week Evans may see a lot of a cornerback who can handle such a challenge in the Rams’ Jalen Ramsey, most recently seen shutting down Seattle’s D.K. Metcalf. If the Rams choose to shadow Evans with Ramsey it should prove to be one of the most entertaining things to watch during Monday’s game.

ILB ﻿Lavonte David﻿. David will start and play in his 132nd NFL game on Monday night, all of those with the Buccaneers since he was drafted in the second round in 2012. In the process he will pass John Lynch for seventh place on the franchise’s all-time games started list and tie Richard Wood for 10th place on the game played chart. When he ties Wood, he will be the only player in that top 10 to have started his career since 2000, meaning he is very much the current face of the franchise. And, incredibly, he is still playing at the same level, if not better, than he did in his early 20s. The NFL Defensive Player of the Month for September, David has been a force in coverage and a tackling machine for the NFL’s top-ranked run defense. Both will be critical to the Bucs’ defensive success on Monday night as the Rams’ attack features two good pass-catching backs in Tyler Higbee and Gerald Everett, and a rushing attack that gains 135 yards a game by constantly throwing fresh legs at defenses with Darrell Henderson, Malcolm Brown and Cam Akers. The Rams’ offense is tricky, not because it runs different plays than the Bucs’ other opponents but because it does a good job of making everything look like it’s going to be something else before the play unfolds. The best weapon against this sort of thing is a veteran defender who has seen it all and has a high football IQ, and that’s a good description of Lavonte David.

TE ﻿Rob Gronkowski﻿ . Gronkowski had his biggest “Gronk” moment yet as a Buccaneer in Week 10, snatching a deep pass over a defender down the sideline and then running over said defender and bulling his way down towards the goal line. The Saints stopped Gronkowski (and virtually everything else in the Bucs’ offense) in Week Nine but otherwise the big tight end has been on a roll. He has at least 50 yards and at least one touchdown in four of the Bucs’ last six games. The Rams’ defense has been superb this season, but it no longer features Cory Littleton, one of the best pass-coverage linebackers in the NFL. His replacement in the starting lineup, Micah Kiser, is having a fine season but is more of a thumper than a cover man. The Rams have given up some notable numbers when facing some of the league’s top tight ends, with George Kittle, Evan Engram, Zach Ertz and Jimmy Graham all catching at least five passes against Los Angeles this season. Kittle stung Los Angeles for seven catches, 109 yards and a touchdown before hitting injured reserve. Last week, even with Los Angeles containing the Seahawk’s powerful offense, tight end Greg Olsen had one of his team’s few big plays with a 22-yard reception. Gronkowski plays almost all of the Bucs’ offensive snaps in most games because he’s such a good blocker, so if the Buccaneers can indeed establish the run against the Rams’ very solid front, it will open up the possibility for Gronkowski to slip off the line and into open space, as he did on a seven-yard touchdown catch against the Panthers.