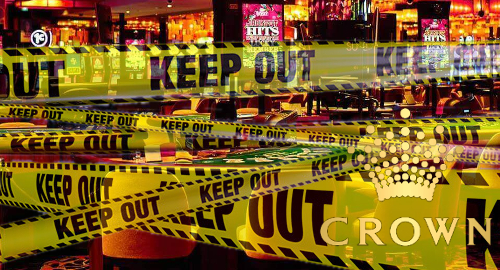 Australian casino operator Crown Resorts is disassociating itself from its former junket partners as the endless stream of negative news emerging from a regulatory inquiry shows no sign of abating.

On Friday, Crown announced that it had “suspended all activity with junket operators until 30 June 2021 while it undertakes a comprehensive review of its processes related to junket operators.”

Trying to calm investors as to the effect this new junket stance will have on operations, Crown said junket-based VIP play at its Melbourne and Perth casinos accounted for around 7% of its earnings over the past five years. Crown added that it’s also searching for someone to fill “the newly created role of Head of Compliance and Financial Crimes.”

MRE is run by Packer’s former joint venture partner Lawrence Ho. That share sale eventually fell apart as the ILGA raised questions about Ho’s ties to his father Stanley, with whom Crown had been ordered not to have any association.

On May 3, 2019, despite having stepped down from Crown’s board and relinquished any executive role, Packer asked Barton to send him financial forecasts for the company through 2022.

On May 21, Crown director Michael Johnston – an executive at Packer’s Consolidated Press Holdings, through which Packer owned his Crown stake – followed up on this request by asking Barton to increase Crown’s revenue projections. Specifically, Barton told the inquiry that Johnston asked him to boost Crown’s expected VIP gambling revenue.

Barton, who told the inquiry that he couldn’t recall whether he’d done as Johnston asked, previously claimed that Crown’s board were in the dark regarding Packer’s plan to sell 20% of the company to Ho.

Johnston told the inquiry that Barton’s revised figures were “not as much as I was suggesting, but some modification,” including a “slightly higher assumed growth rate in table game revenue.”

Johnston also revealed that he’d provided MRE with Crown financial data ahead of the share sale, but that this data wasn’t the same as the report supplied by Barton. Johnston said he gave MRE data for Crown’s FY19 and FY20 fiscal years “where management’s forecasts were relative to consensus.” Johnston claimed that the data was “guidance, it was not detailed financial information.”

The inquiry’s findings could have a profound impact on Crown’s new baby, the AU$2b Crown Sydney Hotel Resort in the Barangaroo district. Crown said Friday that the venue would “progressively open … on or around 14 December 2020.”

From the start, Crown Sydney was intended as a hub for Asian VIP gamblers – which is why the company agreed to forego the right to host video poker machines (pokies), which cater to a more local clientele – a strategy that now appears spectacularly ill-conceived.