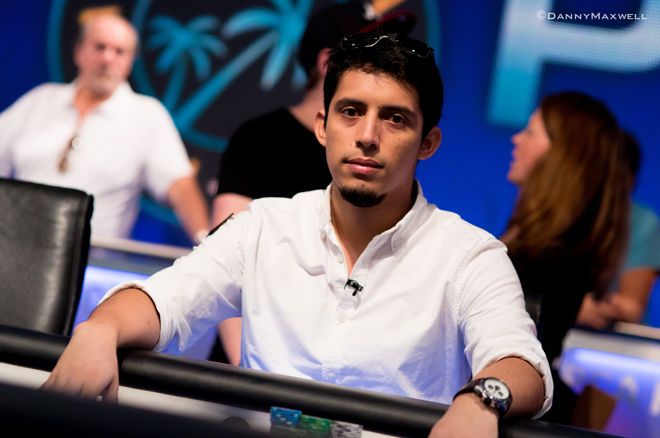 Diego Ventura wrote himself into partypoker’s history books on November 25 when he came out on top of a stacked final table to become the 2020 Caribbean Poker Party Main Event champion.

Ventura shone brightly throughout this $5,300 buy-in event, topping the chip counts at the conclusion of each day. Now he has $879,894 more than a few days ago plus the title of CPP Online Main Event champion.

The nine-handed final table set off at a blistering pace that saw three players busting out before the first scheduled break.

Ukraine’s Pavlo Kolinkovskyi was the first of that trio heading to the exits. He min-raised in late position with ace-king and called off his last 23 big blinds when Grayson Ramage three-bet all-in from the big blind with queen-jack. A jack on the flop sent the Ukrainian to the rail.

Jonathan Proudfoot crashed out soon after. The talented British pro open-shoved for 11 big blinds from the small blind with ace-four and Team partypoker’s Isaac Haxton looked him up with the dominating ace-nine. Haxton’s hand held and Proudfoot hot-footed it out of the door.

Then came the demise of Mexico’s Enrico Camosci. He defended his big blind with six-five of hearts after Ramage opened from under the gun. Camosci check-called a continuation bet on a seven-high flop before check-raising all-in when he turned an open-ended straight draw. Ramage called with a pair of queens in the hole, Camosci missed his outs, and the final table was suddenly down to six players.

It took another 45-minutes before the next player busted, Aleksejs Ponakovs being that player. Ventura was first to act in the small blind and he set Ponakovs all-in for his last 15 big blinds. Ponakovs called with queen-jack but that failed to connect with the board and ultimately lost to Ventura’s ace-jack.

Earn up to 40% cashback every week

Haxton’s impressive run ended in a fifth-place finish after losing a coinflip to the hot-running Ramage. Haxton three-bet all-in for 20 or so big blinds with ace-king after Ramage had opened yet another pot with a min-raise. Ramage called and showed pocket eights. Haxton’s Big Slick couldn’t melt those snowmen and he headed to the exits.

Ventura claimed the scalp of Philippe D’Auteuil shortly after Haxton bowed out. D’Auteuil opened to 36 million leaving himself only 13.5 million behind, or 3.5 big blinds. Ventura called that bet before check-calling D’Auteuil’s shove on an ace-high flop. D’Auteuil had a gutshot on the flop and picked up a flush draw on the turn, but the river bricked and he busted.

Heads-up was set when Lithuania’s Dominykas Mikolaitis ran out of steam in third place. It was that man Ventura who did the damage. Ventura clicked it open to 10 million with ace-jack and quickly called when Mikolaitis three-bet all-in for 20 big blinds with ace-nine. Ventura flopped Broadway and that, as they say, is that.

Ventura trailed Ramage by 343,514,572 to 690,750,760 chips going into the one-on-one battle. They grappled with each other for 45-minutes with neither managing to get a foothold in the match and pull ahead. Something had to give and it certainly did.

Ramage opened with pocket queens and Ventura called with ten-eight. Ventura flopped top two pair and check-raised Ramage’s continuation bet only for Ramage to put in a re-raise of his own. Ventura called and a deuce landed on the turn, which was a complete brick and Ventura check-called another Ramage bet.

A seven on the river received the same treatment, Ventura check-calling Ramage’s jam. The Peruvian’s two pair was good, meaning Ramage had to make do with the $631,636 runner-up prize while Ventura scooped a huge $879,894 score.

Pascal Lefrancois took down the $25,500 Super High Roller earlier in the series and followed that impressive victory up with another in the $10,300 High Roller event.

Lefrancois topped a star-studded field of 111 entrants to lock up another $277,268. The Canadian overcame some of poker’s elite players on his way to victory, including former MILLIONS Online champion Jon Van Fleet and UK-based Spaniard Juan Pardo Dominguez, the latter being this event’s runner-up.

Grab Up to $30 Worth of SPINS and MTT Tickets

The CPP may be done and dusted but there’s still plenty going on at partypoker. The Daily Legends tournaments are fantastic and the cash games are as busy as ever. Oh, and you can earn up to 40% cashback every single week!

PokerNews can help you if you don’t currently play at partypoker and also gift you up to $30 worth of free tournament tickets.

Deposit $20 and receive $30 worth of tickets over the course of a week: