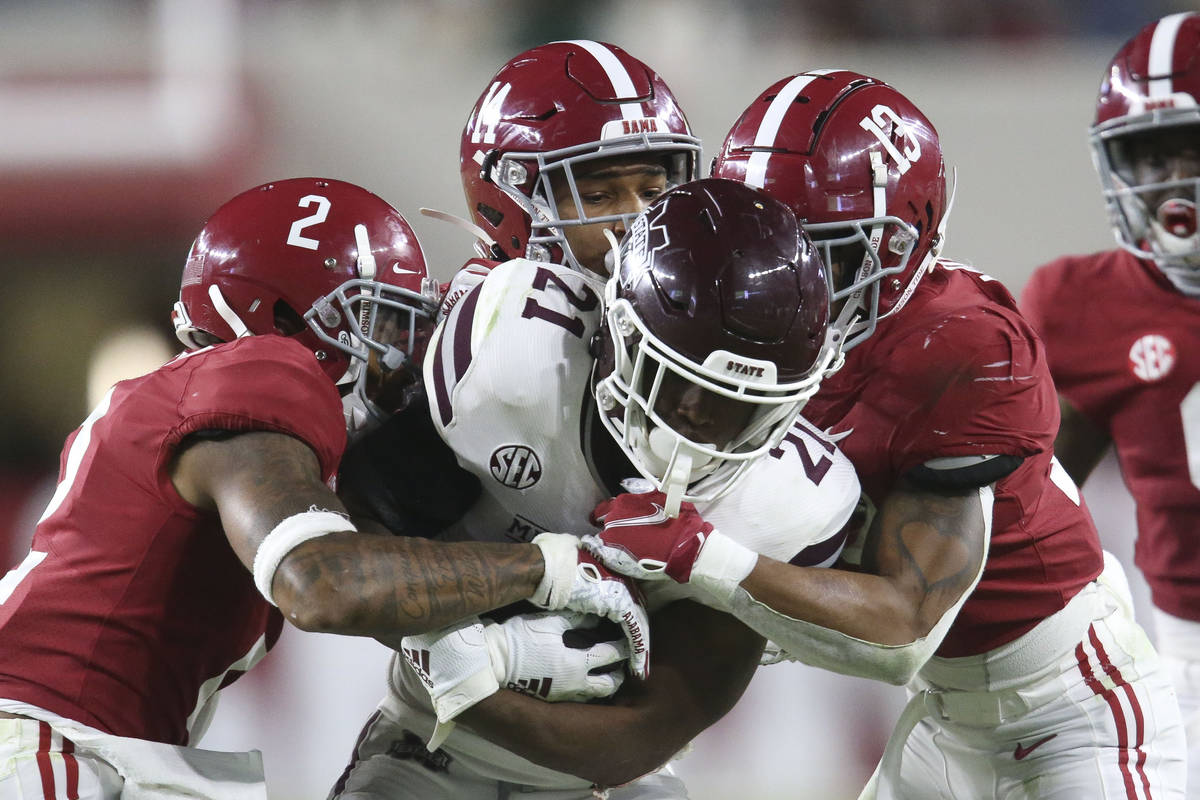 There are reasons to advocate for Kentucky as a big underdog at Alabama.

Nick Saban often takes mercy on lesser Southeastern Conference opponents in the second half. The Iron Bowl is next week.

The Wildcats run on 60.8 percent of their offensive snaps and run at the eighth-slowest pace on a seconds-per-play basis. Alabama’s defense has been vulnerable to long touchdowns on missed assignments.

However, this isn’t a typical backdoor cover spot against the Tide. Instead of getting revenge on Louisiana State, Alabama sat at home for a second consecutive weekend.

Saban, typically good with extra time to prepare, isn’t going to waste a lower-stakes opportunity against an SEC team with Auburn and presumably Florida on the horizon.

Kentucky is 113th in passing success rate. The Wildcats have two passing plays of at least 30 yards in seven games.

Alabama’s corners have graded out well, but it has blown coverages against running backs and tight ends. Kentucky can’t create explosive passes at those positions.

Kentucky might take a conservative approach and try to keep the score respectable. That worked against Georgia. I expect Alabama to cover this number by sometime in the third quarter, and I don’t think the Wildcats will claw back to cash.

OREGON STATE (+3) over California: I’ve tried to fade Cal multiple times, only to see Bears games get canceled. When the team finally took the field Sunday against UCLA, it got humiliated 34-10. UCLA outgained Cal 5.5 to 2.8 yards per play. A healthy Chase Garbers was supposed to make the difference for Cal, but he threw for 3.7 yards per attempt on a UCLA team that just gave up 48 points to Colorado. Cal’s defense has slipped, which only makes the incompetence of their house-of-cards offense that much more obvious. Oregon State is 10-4 against the spread since the start of last season and still isn’t getting enough respect.

Michigan (-11½) over RUTGERS: Jim Harbaugh probably deserves to lose his job if he can’t cover the spread here. Rutgers lucked into a season-opening win because of seven Michigan State turnovers. It covered against Ohio State because of four touchdowns against backups in the final 1½ quarters, including a score on a blocked punt. Rutgers is 101st in passing success rate on offense and 107th on defense. Michigan quarterback Joe Milton is a different quarterback when throwing from a clean pocket. Regardless of who plays for the Wolverines, expect more production against Rutgers.

PENN STATE (+2½) over Iowa: The Nittany Lions flamed out at the Nebraska 11 and the Nebraska 9 on their final two drives of a 30-23 loss last week, nearly completing a comeback after trailing 27-6 in the third quarter. Penn State was unlucky to give up a defensive score, too. That doesn’t seem like a team that’s giving up on the season. Penn State should have beaten a pretty good Indiana team and played competitive ball against Ohio State. The Nittany Lions are a better team than Iowa, which is overvalued after squashing bad Michigan State and Minnesota teams.

Christopher Smith of AL.com and BetOnline is providing college football analysis for the Las Vegas Review-Journal. Follow @cfblocksmith on Twitter.