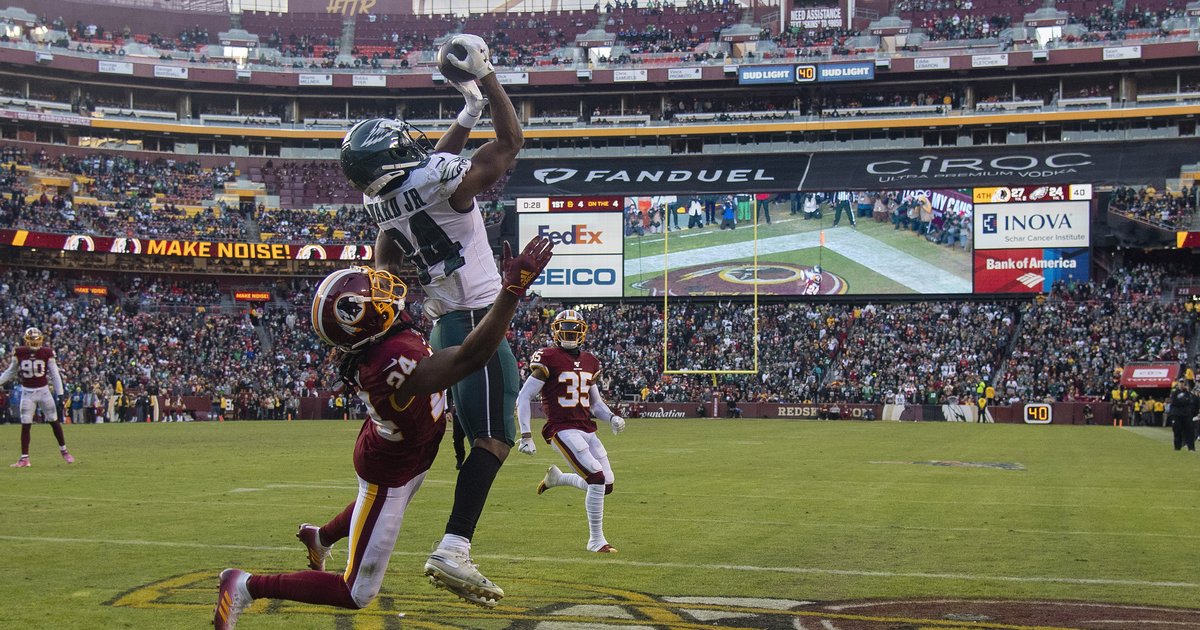 If the wait for NFL football to return felt longer than usual, you’re not alone. But, after an abnormal offseason in the face of a global pandemic, professional football will be back on our screens starting on Thursday night.

For Eagles fans, the wait to see their team play will take a few more days, with their opener coming on Sunday against the Washington Football Team (which is an absolutely hysterical thing to write but still much better than the alternative). The Birds haven’t lost to a team from Washington (no matter the name) since 2016, going a perfect 6-0 against their division rivals over the last three years, including a pair of Week 1 wins.

Can the Eagles provide a repeat of last season’s opener, when Carson Wentz and DeSean Jackson showed a glimpse of what many thought was going to be a dangerous combination in 2019 until the latter suffered a season-ending abdominal injury? How much will Miles Sanders play? Will Darius Slay be able to stop Terry McLaurin from torching the secondary? Can the offensive line hold up against Washington’s stout pass rush?

But first, let’s take a look at how our writers see Sunday’s game against the Washington Football Team playing out, as well as how to watch and the latest betting lines…

Doug Pederson and Jim Schwartz have proven that they are able to have their team ready to play Week 1, as the Eagles have started 1-0 in each of the last four years. They’ve also been successful against Washington, sweeping their division rival in each of the last three years:

That would be a combined score of 185-108 in favor of the Eagles in the last six matchups between these two teams.

This Washington team, however, is going to be tricky to prepare for, as they have a new coaching staff, and a number of rookies in prominent roles, such as No. 2 overall pick Chase Young, and third-round starting running back Antonio Gibson.

The matchups generally favor the Eagles, who still have a playoff-worthy roster, while the Football Team has a looooong way to go before they’ll seriously contend. The one matchup that should worry the Eagles is their offensive line against a very good, emerging Football Team defensive line that is heavy on talent and depth.

Ultimately, however, the Football Team is far too light on offensive weapons, and the Eagles should be able to outscore them.

I have no idea what the Eagles offensive line will look like against Washington’s loaded front seven.

I have no clue how the Eagles skill players will perform, or even who will be playing and how much.

I have no idea if the Eagles’ secondary will be better than it was last year, and will keep Terry McLaurin in check.

All I know is Carson Wentz will be the best player on the field Sunday, in a weird game at FedEx Field with no fans, and I expect the Eagles to breeze to a win over a ‘Football Team’ that has had quite the eventful offseason and is adjusting to a new head coach and new scheme.

Picking Eagles games is typically a difficult thing to do, but over the last three or four years, there’s been one matchup where it’s been quite easy to pencil the Birds in for a win, and that’s been against Washington. As we mentioned above, they haven’t lost to Washington since 2016, Carson Wentz and Doug Pederson’s first season together. Another thing that’s been easy to pick for the Eagles is their season opener, as they’ve won four straight and haven’t lost one during the Wentz/Pederson Era.

So a season opener against Washington should be a no-brainer, right?

Not quite, as we’ve yet to see any glimpse of what these two teams are going to look like on Sunday. Sure, there were training camp practices, but without any real preseason action and coming off a unique offseason, it’s really hard to get a beat on this game. I could go through the matchups and list the reasons I’m worried about the Eagles in this one — like, for example, Philly’s offensive line or the fact that Washington has a new coaching staff, creating even more unknowns — but one thing I’m trying to get better at is not overthinking things. And this doesn’t seem like it requires a ton of thinking.

The Eagles are the better team. They have Washington’s number. They’re very good in season openers under Pederson. I’m taking the Birds.

Hard to believe football is back, personally. With summer basketball to keep me occupied, I wasn’t as desperate to hang on every piece of training camp news as I am when we’re emerging from the other side of baseball-only summers.

I have a couple of guiding beliefs, though, and the main one is that offense will be king early in the season in a more pronounced way than usual. The lack of crowd noise will make communication and LOS adjustments easier than they have ever been, and the game has already tilted so far toward offense that I think it’s going to be tough sledding for defenses early on.

So this pick comes down to which offense I believe in more, and that’s the Eagles by a good margin, in spite of the question marks I have about the young wideout group and the offensive line. If they can keep Wentz upright, which will be the theme of this season, I trust they’ll put points on the board. On the flipside, I think Washington’s OL is exploitable and Haskins is someone they should be able to rattle.

Plus, do they really want to be the first team to lose to the Washington Football Team? Come on.

I get to do the annoying office break dance on the table in the empty conference room, and probably pull a muscle doing it, as the PhillyVoice 2019 champion, going 12-5 last year. This season starts off like last year, beating a team with no name, and no identity–yet. The Eagles are not going to be very good, which I don’t think is a reach. But they’re better than “the Washington team.” The Eagles may finish 9-7, but will probably go 8-8. Carson Wentz is coming into his own both on and off the field, and the real shame is that as he enters his prime only remnants remain from the 2017 Super Bowl team. The Eagles expect Wentz to carry this load, and this could be “a load” all right.

I would take Washington and the points in the opening of the 2020 bizarro world NFL season. But the Eagles win the game outright. Expect a very bad football game by both teams. A wincing prediction no one in Philadelphia wants to see: Chase Young coming off the edge by the aged, flailing Jason Peters and slams full throttle into Wentz, which leads to an injury. Between Young, Montez Sweat, Ryan Kerrigan, Jon Allen and Daron Payne, Wentz may be no more than a human dart board, protected by a Swiss cheese, incohesive offensive line. And if you don’t agree with that, then I have a message for you.

MORE: With leadership questions behind him, the Eagles are Carson Wentz’s team now

Uncertainty has been the theme around the NFL for Week 1 with no one really knowing what to expect after a virtual offseason, a truncated training camp, and no preseason. In that type of environment, you can talk yourself into things.

With the WFT, the concern is its defensive front with Chase Young being added to an already impressive group, and that strength marries up with the musical chairs on the Eagles’ offensive line through the spring and summer. However, even if Philadelphia struggles offensively, it’s hard to imagine Washington being able to generate much on that side of the ball, outside the occasional deep shot to Terry McLaurin.

This content and the links provided are sponsored by thelines.com and playpennsylvania.com, PhillyVoice.com’s Official 2020/2021 Betting Odds Partner, independently created by PhillyVoice.