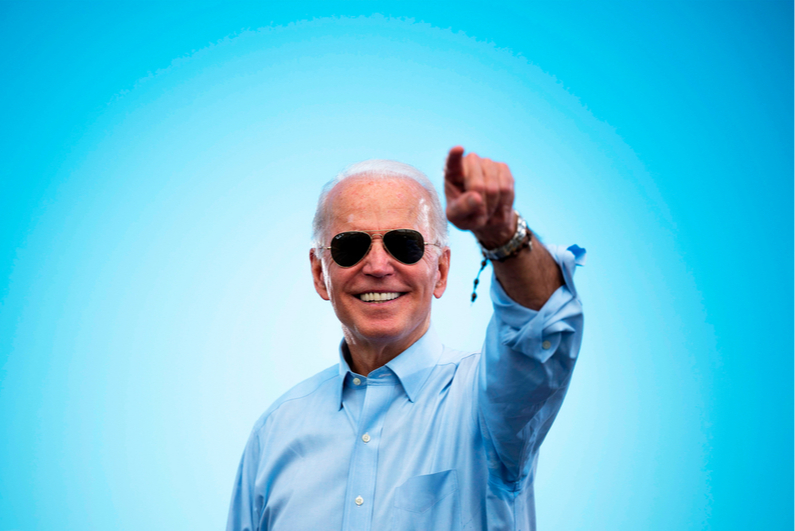 Joe Biden has been President of the United States for three days and has already begun implementing policies to try to help the country and its citizens. While it is early, the gambling industry is optimistic that the Biden Administration will be good for it on a number of fronts, from land-based casinos to sports betting to online gambling.

Of primary importance for both the nation and the gaming industry is the COVID-19 pandemic. Casinos have been forced to close and when open, operate at a fraction of capacity, air travel has been decimated, and casino workers have been out of work. Without real progress on the pandemic, this extended economic valley will continue for the brick-and-mortar gaming and many other industries.

achieve policies that accelerate the recovery of the gaming industry and entire U.S. economy”

American Gaming Association president and CEO Bill Miller tweeted on Wednesday to President Biden and Vice President Kamala Harris that the AGA “looks forward to working with your administration to achieve policies that accelerate the recovery of the gaming industry and entire U.S. economy.”

By all measures and expert accounts, the Trump Administration’s response to the COVID-19 was nothing short of disastrous. CNN reported that Trump’s team left Biden’s with no vaccine distribution plan. President Biden has made handling the pandemic his top priority, working to ramp up and coordinate vaccine distribution and unveiling a $1.9tn relief package that includes direct economic payments to Americans.

Roger Dow, president and CEO of the US Travel Association said a Wednesday statement: “We are encouraged by the administration’s focus on providing additional, direct relief to businesses in the hardest-hit industries.”

The election of Joe Biden also appears to be a positive for the sports betting industry. Since the Supreme Court overturned PASPA in 2018, around half of the states have legalized sports wagering. By all accounts, the Biden Administration has no intention of interfering with the industry’s expansion.

One of the biggest reasons for this is that for President Biden, there is no point in getting involved either way. States can make their own decisions on what they want to do and with the pandemic and all the other problems on his plate to start his term, sports betting might not even be a blip on his radar. Even if it was, President Biden has not shown to be against sports betting.

At worst, the Biden Administration might encourage federal and state governments to work together. Last fall, Senators Chuck Schumer and Mitt Romney introduced a bill which would establish uniform, federal sports betting regulations, rather than having every state draw up their own. A representative from the then-Biden campaign told CDC Gaming Reports that he “believes states and federal authorities should cooperate to ensure that gambling is safe, fair, and corruption-free.”

As to the specific bill, Joe Biden’s campaign was non-committal. Again, it is not a priority for the new President.

The online gambling industry, particularly online poker, also likely breathed a sigh of relief when Joe Biden was elected, as he has no intentions of making it more difficult for operators to conduct business. In that same statement to CDC Gaming Reports in December, his campaign said that the now-President “doesn’t support adding unnecessary restrictions to the gaming industry like the Trump Administration has done.”

Where the Trump Administration meddled was the Federal Wire Act of 1961. The Wire Act made sports betting over interstate communications wires illegal, a measure designed to foil organized crime. With the rise of online poker, the Department of Justice extended the Act’s interpretation to include all online gambling. In December 2011, however, the DOJ’s Office of Legal Counsel (OLC) issued an opinion, saying that the Wire Act did, in fact, apply only to sports betting.

expected to withdraw from the lawsuit completely

In 2018, the Trump Administration’s OLC reversed that reversal, saying that the Wire Act once again made all online gambling illegal. The New Hampshire Lottery Commission sued and just this week, the US First Circuit Court of Appeals rejected the DOJ’s opinion. The next step for the DOJ would be to take it to the Supreme Court, but the Biden Administration has no plans to do that and is expected to withdraw from the lawsuit completely.