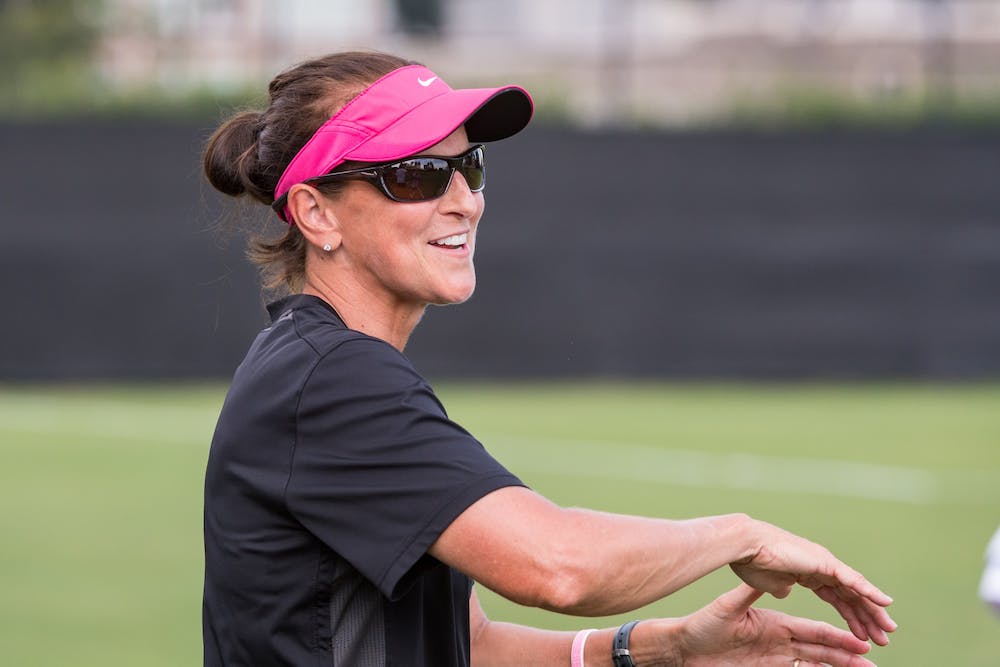 But, this is also the story of a mom, a coach, a mentor and a friend.

Duke assistant coach Carla Overbeck has been on the Blue Devil staff since 1992. During that time, she helped bring women’s soccer to the Olympics in 1996 and captained perhaps the most memorable World Cup team ever in 1999, often flying under the radar.

“If you go back and talk to Mia Hamm and Brandi Chastain and Julie Foudy, the glue of [the U.S. women’s national team] was Carla Overbeck,” Duke head coach Robbie Church told The Chronicle. “And they will say that. She doesn’t get as much credit as she deserves, but really she was a glue to that whole group. The glue of our group, too.”

As with any good story, though, the best place to start is at the beginning.

Born in California but raised in Texas, Overbeck was surrounded by sports from a young age. As the younger sister of three older siblings, she had no choice but to accompany her parents as they chaperoned her siblings around to their various sporting events, soccer a principal one among them. Naturally, Overbeck got involved with the game, though with no idea of where it would eventually take her. But soccer wasn’t her only passion, as she was quick to point out.

“Back then, you’re able to play all different kinds of sports. They don’t specialize like they do now,” Overbeck told The Chronicle. “So I played soccer, basketball, volleyball [and] softball—did all the sports. And I was probably the best at soccer, but I probably liked basketball and volleyball the most.”

For her siblings, their involvement with sports faded once they began college, all of them attending Texas A&M. Initially, Overbeck wanted to follow in their footsteps and become an Aggie as well, not intending to stray too far from home. But soccer had a different plan for her.

She considered herself a homebody, and got a little embarrassed when coaches called, not fully believing that someone wanted her to play at their school. Lucky for women’s soccer, however, they recognized something in her.

Mainly recruited by Duke’s neighbors down the road at North Carolina, Overbeck was hesitant about the opportunity, still wishing to remain close to home. But her parents pushed her and gave her the confidence to go.

“I wanted to stay close to home and North Carolina wasn’t close to Texas,” Overbeck said. “My parents thought it would be really good for me to go away to college and try this. It was just a great experience after I got over my homesickness, and then I realized, ‘Hey, there are these opportunities out there for me in the sport and I would love to pursue them.’”

Get Overtime, all Duke athletics

Signup for our editorially curated, weekly newsletter. Cancel at any time.

Humble as she is, Overbeck glossed over her extensive list of college accomplishments—I’m not going to do the same. Prior to her becoming a Tar Heel, North Carolina was already a three-time national champion in women’s soccer. But it was during Overbeck’s tenure that UNC established itself as a juggernaut in the sport.

In each of her four seasons as a central defender, from 1986 to 1989, North Carolina won the NCAA Women’s Soccer Championship, tallying a 95-match unbeaten streak in the process (89-0-6). Individually, she was a four-time member of the NCAA All-Tournament team and a two-time All-ACC selection. And it was during this run of brilliance that she realized that soccer was what she wanted to pursue.

Bursting onto the international scene

In 1985, one year before Overbeck started at North Carolina, the United States women’s soccer national team played its first international match. Overbeck joined the squad in 1988, before she had even graduated.

“It was funny back then,” Overbeck said. “Women’s soccer wasn’t very well-known outside of college and college teams.”

Overbeck and her teammates made sure that didn’t stay the case.

When Overbeck began playing for the U.S. national team, the Women’s World Cup wasn’t yet a thing, though the Men’s World Cup dated back to 1930. So when it was announced that the first ever Women’s World Cup would be held in China in 1991, Overbeck and her teammates didn’t know what to expect. But once there, they were taken aback by the magnitude of the event, in the best way possible.

“All the Europeans would be in European championships and they would be in all these big tournaments in front of lots of people. And we as Americans had never experienced that,” Overbeck said. “So we went over to China and there were 80,000 people at our games and we couldn’t believe it. The crowds were incredible. The entire Chinese culture embraced this tournament, which I had never experienced before. It was unbelievable.”

Overbeck and the team quickly settled in, dominating the competition en route to the first ever Women’s World Cup title. But Overbeck wasn’t done winning.

From a young age, Overbeck had dreamed of being an Olympian. She recalls watching the Olympics every four years growing up, back when the Summer and Winter Games happened in the same year.

At one point, her dream was to become an Olympic downhill skier, but that never took off for her, seeing as she lived in Texas. But now, as an elite soccer player on the world champion women’s national team, she had a shot. Only one thing stood in her way—the Olympics didn’t have women’s soccer yet.

But instead of simply accepting that, Overbeck and her teammates made the Olympics a reality.

“The ‘96 Games were pretty special,” Overbeck said. “We fought a lot and challenged our federation and signed petitions and we did all these things in hopes it would get in the Olympics in ‘96.”

Fast forward to those 1996 Games, and the U.S. wins the first ever gold medal for women’s soccer.

“I felt like we were a big part of that movement making it happen in ‘96,” Overbeck said. “So it was pretty special that we won.”

At this point, Overbeck was a national champion, World Cup winner and Olympic gold medal winner, already putting her in the most elite bracket of athletes. But there was more that she wanted to do.

Through her entire time advocating for women’s soccer, playing every minute in the 1995 World Cup and winning a gold medal in the 1996 Olympics, Overbeck had also begun her coaching career at Duke, joining the team in 1992 and being a staple of the program ever since.

But after the 1996 Games, she decided she wanted more than just soccer in her life, having a son in 1997 and a daughter just a few years later. Nevertheless, she didn’t miss a beat when the World Cup came around again in 1999, once again leading the U.S. to a title.

Overbeck retired from international competition in 2000 after her second Olympics, this time winning silver.

So, if you haven’t been keeping track, here’s a quick rundown of Overbeck’s accomplishments: four national titles in college, two World Cup championships, an Olympic gold and an Olympic silver. Not bad, right? But Overbeck doesn’t just want to be remembered by a list of accomplishments—she wants to leave behind a legacy.

“As a player, I always wanted to leave the game and the national team in a better place than I found it,” Overbeck said.

It’s safe to say she did just that.

Since her retirement from international competition, Overbeck has remained as an assistant coach at Duke, and Church joined her shortly after in 2001. Despite spending her college career at North Carolina, Overbeck hasn’t felt the pull to move elsewhere.

“I love it here,” Overbeck said. “The people that [work here at Duke] are incredible people. The kids that we bring into Duke are great people first and great soccer players second. To mentor these kids throughout their lives while they’re here for four years is an opportunity that I cherish. And I love all these players. I love this team.”

Over the years, Overbeck has coached many girls coming through Duke. And it’s not just a love for the game that’s kept her coming back, though that’s certainly part of it—it’s a love for the players. Of all the success that her teams have had on the field, it’s what happens off the field that she considers to be her proudest moments.

“My proudest moment is just seeing what they do after they leave here and to think maybe I had just a little bit of influence on them and how they are as people when they leave,” Overbeck said.

Overbeck has never sought out the spotlight. The way she puts it, things just fell into place. But that’s just her being humble. You don’t become one of the top women’s soccer players of all time without a bit of hard work and determination.

Overbeck doesn’t want to just be known as a World Cup champion or an Olympic champion. Instead, she wants the focus to be on the change she helped bring.

At the end of the day, it wasn’t just about winning—it was about being and bringing happiness and lasting change. And she did that, and continues to do that, to this very day.