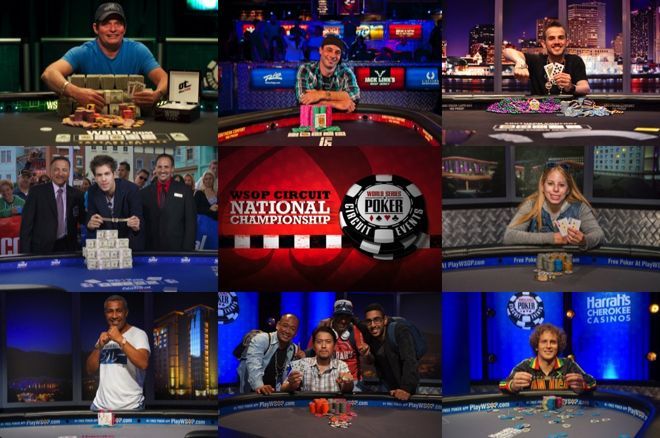 There’s still one more online bracelet to be awarded this month!

Earlier this year, the World Series of Poker (WSOP) Circuit announced that its season-ended Global Casino Championship, originally scheduled to take place at North Carolina’s Harrah’s Cherokee in August, would move online to WSOP.com on September 13 as a result of the COVID-19 pandemic.

This Sunday, PokerNews will not only be live reporting the event but also live streaming it on our Twitch channel.

The WSOP Circuit was launched in 2005 as both a build-up to the annual WSOP and to take the magic of the summer series across the country. Ten years later, the WSOPC would expand worldwide with the WSOP International Circuit. In 2011, a season-ending championship was introduced.

In preparation for this year’s Global Casino Championship, we took a look back at the event’s history.

In 2011, the WSOPC hosted its first National Championship, which was held at Caesars Palace just prior to that year’s WSOP. The tournament was only open to 100 WSOPC qualifiers and offered up a $1,000,000 prize pool.

The inaugural winner was Arkansas’ Sam Barnhart, who qualified after winning the WSOPC Horseshoe Tunica for $148,612 three months earlier. Barnhart’s heater continued later in the summer when he finished 17th in the WSOP Main Event for a career-high $378,796.

Barnhart relocated to Las Vegas after his remarkable run where he still resides today.

“Mostly cash games and online. Not playing as much,” Barnhart recently told PokerNews when asked what he’s been up to. “I’m also doing real estate. I will eventually get in commercial ‘selling businesses.’”

The following year, the National Championship moved over to the Rio and took place during the WSOP. That year, officials also expanded the field by offering the top 100 players in the WSOP World Rankings, a points race determined on results in open events from the two years previous, the chance to enter if they wanted to pony up the $10,000 buy-in.

That year the tournament drew 157 runners and saw Ryan Eriquezzo, who had qualified by winning the 2012 WSOP Circuit Caesars Atlantic City Main Event, come out on top to win his first bracelet and a $416,051 top prize.

Down to the Big Easy

For the 2012-13 Season, the WSOPC was sponsored by Southern Comfort 100 and the National Championship was moved back to its May timeslot. In addition, it was moved to Harrah’s New Orleans to coincide with the final stop of the WSOPC season.

The field dropped to 127 runners and saw Jonathan Hilton, who was an at-large qualifier, beat Max Steinberg in heads-up play to win the bracelet and accompanying $355,599 first-place prize.

Battle on the Boardwalk

In 2014, the National Championship moved once again to Bally’s Casino Atlantic City and the final table was held outdoors on the famed Boardwalk. For the first time ever, a player who paid $10,000 to enter the tournament came out on top as German pro Dominik Nitsche beat a 126-player field to win a $352,800 first-place prize and what was his second gold bracelet.

Speaking of winning a second bracelet, Loni Harwood did the same thing in 2015 when the tournament drew 122 players. The fifth annual National Championship moved to Harrah’s Cherokee in North Carolina for the first time, and Harwood, who bought her way in for $10,000, bested one of the WSOP Circuit’s most accomplished players, Alex Masek, in heads-up play to win the title for $341,599.

Ushering in the Global Casino Championship

In 2016, there was a rebranding of sorts as the National Championship, which had previously considered only US-based stops, became the Global Casino Championship after the introduction of the international circuit. That meant from players could earn qualifying points worldwide.

In 2017, well-known West Coast poker pro Sean Yu navigated a 124-player field to win the Global Casino Championship at Harrah’s Cherokee for $296,341. He has qualified nearly a year before after defeating Eli Elezra heads up in the WSOP Circuit Planet Hollywood Main Event.

The heater continued for Yu as the next month he won a $1,100 Main Event at Commerce for $209,030 and then a week later won a WSOPC gold ring at Thunder Valley Casino.

In 2018, the Global Casino Championship attracted 127 players to Harrah’s Cherokee and saw Warren Sheaves take it down for $282,113 and his first bracelet. Sheaves had qualified after finishing in 10th place on that year’s points leaderboard.

After his victory, Sheaves told assembled media: “I feel pretty good, but they only invited 120 people or so to this tournament. So, I just kind of feel like this is a medium bracelet, you know? It doesn’t really fit my ego.”

At the time, WSOP Executive Director Ty Stewart said of the event: “Ten years ago, we only had 12 Circuit stops and they were all in the U.S. We’re proud to have grown it to 39 stops in 11 different countries and the Global Casino Championship at Harrah’s Cherokee exists to put the best of the best in the same room to see who comes out on top. We’ll continue to work hard to make the World Series of Poker the biggest and best poker tournaments to play all around the world.”

In 2019, the Global Casino Championship had 129 players take to the felt, and it was a familiar face coming out on top as the 2012 champ Ryan Eriquezzo beat Eric Salazar heads up to win the title for a second time, plus a $279,431 top prize.

“It’s very similar, but at the same it’s different,” said Eriquezzo, who qualified after winning the 2019 WSOPC Harrah’s Atlantic City Main Event for $124,397. “My rail in Vegas was huge; everyone was rooting for me. This was a bit different; it felt like I was coming into hostile territory.”

As it stands, Eriquezzo is the reigning Global Casino Champion.