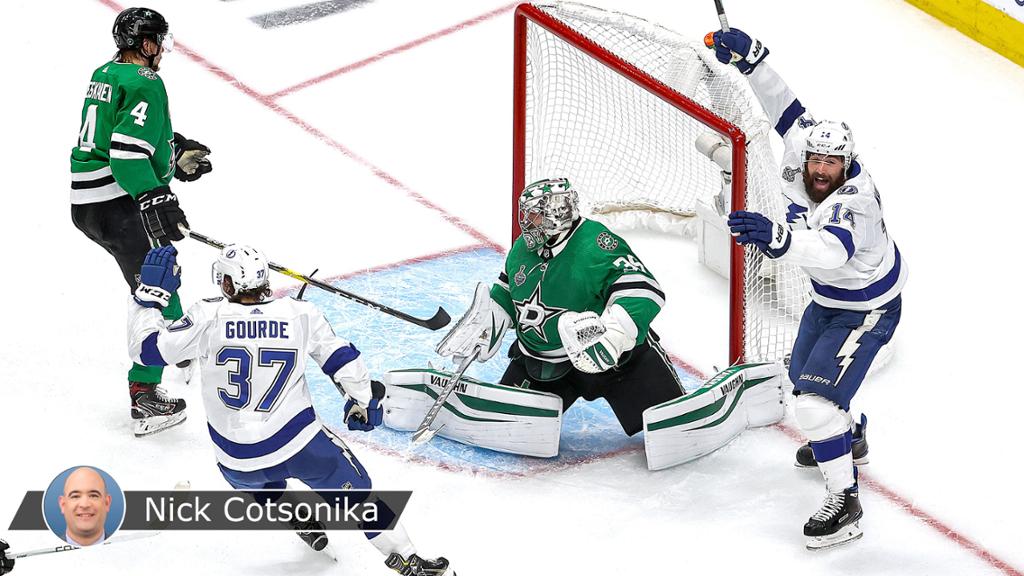 The Tampa Bay Lightning celebrated, of course, when Kevin Shattenkirk walked into the locker room. The defenseman scored on the power play at 6:34 of overtime, giving them a 5-4 win against the Dallas Stars in Game 4 of the Stanley Cup Final on Friday.

They knew they were one win from the Stanley Cup and less than 24 hours from Game 5 at Rogers Place in Edmonton, the hub city for the best-of-7 series, on Saturday (8 p.m. ET; NBC, CBC, SN, TVAS).

But quickly they quieted. Out of their 17 wins this postseason — two in the round-robin part of the Stanley Cup Qualifiers, 15 in the Stanley Cup Playoffs — this one was among those that fired them up the least, coach Jon Cooper said.

“When I walk in, you know, there’s usually banter going on, and there was none,” Cooper said. “Like, the guys were …”

Cooper paused, trying to put the feeling to words.

“They came here to do something, and they’re on their way,” he continued. “But like we’ve said all along, we haven’t won anything yet. And they truly believe that, and they know what it takes to win a series. So, we’ve still got to win one more, and we’re not taking anything for granted.”

The wait could be down to hours for the Lightning. But never forget the context: It comes after a wait of more than 17 months since their historic disappointment in the playoffs last season and after a wait of 62 days in the bubble.

Normally, they would have had to wait a year for a chance at redemption. But the 2019-20 season was paused March 12 because of the coronavirus pandemic, and the NHL and the NHL Players’ Association came up with a Return to Play Plan featuring a 24-team tournament in a bubble without fans in the stands.

The Lightning entered the bubble in Toronto on July 26. After a three-game round-robin, they got back at the Blue Jackets by defeating them in five games in the first round. Then they defeated the Boston Bruins in five, traveled to Edmonton and defeated the New York Islanders in six.

Now here they are with a 3-1 series lead on the Stars without a day off before a chance to clinch, and you’d never know it.

“Back-to-backs, you know, it’s not too often you get them,” Lightning forward Brayden Point said. “But I think right now our focus is on just recovering, preparing, watching video, seeing what we can do for the next one.”

The obvious amateur psychologist’s opinion is that they learned from their mistakes last season. No matter how good you are, nothing is guaranteed.

“We stay in the present,” Tampa Bay forward Alex Killorn said. “We don’t worry about what happened before, and we have some great players that make big-time plays.”

Penalties were a theme all night. But when Lightning defenseman Mikhail Sergachev went off for holding at the 37-second mark of overtime, they stayed calm and got through it. The Stars went 0-for-3 on the power play.

“We know what our goal is,” Sergachev said. “We’re trying to get there. It doesn’t really matter if they call a bad call. We go out there and kill it.”

When Stars forward Jamie Benn went off for tripping at 5:10, the Lightning cashed in. They went 3-for-4 on the power play in Game 4 and are 6-for-12 over the past three games.

Shattenkirk wasn’t part of the Lightning’s playoff loss last season, but he has his own disappointment to overcome, his own redemption mission. He was bought out by the New York Rangers and signed with Tampa Bay as a free agent on Aug. 5, 2019.

“I never kind of forget what happened last summer, and I’ve used that to fuel me and just not get comfortable,” Shattenkirk said. “We’ve got a job to do here. It’s still not finished.

“Obviously, any way I can contribute, whether it’s scoring goals or playing solid defensively, whatever it might be, whatever the team asks, that’s what I am to do every night. It’s been a great team effort so far.

“Looking forward to tomorrow night, because then it could all come really full circle.”