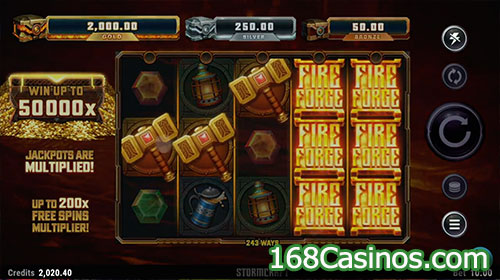 Microgaming and Stormcraft Studios have released a new volatile fire themed slot game titled ‘Fire Forge’ that is based on dwarves that forge swords and other metalwork.

The 5 reel, 3 rows and 243 ways to win slot game comes complete with Rolling Reels. Players need to land 3 or more matching symbols or wilds on adjacent reels, starting from reel 1 to create a winning combination.

Symbols on the reels include 4 lower value gemstones, a lamp, a flask and an anvil. The most lucrative symbol is the Hammer that pays 0.32, 1.4 or 4.8 x a player’s total stake for landing 3, 4 or 5 in combination.

Triggering the Bonus round gives players the choice of 3 different Free Spins/Multiplier combinations with opportunities to win 1 of 3 fixed Jackpot prizes – a Minor, Major or Ultra Jackpot, giving 5x, 25x or 200x a player’s total stake.

The Rolling Reels feature sees successful symbols removed from the reels and new symbols dropping down to replace them after a winning combination is formed.

The Free Spins feature is triggered by landing the Molten Dwarf Head Scatter on all 5 reels. Players then get to pick 3 different features.