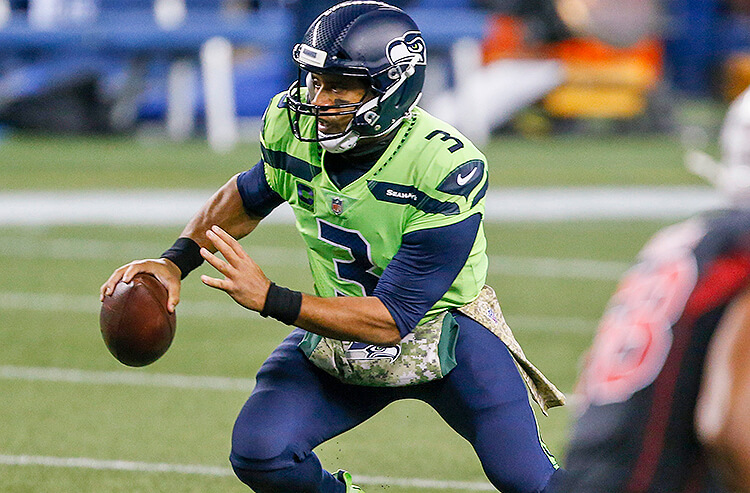 Seven-time Pro-Bowler Russell Wilson is having another MVP caliber season, completing 70.7 percent of his passes for 2,986 yards and 30 touchdowns through 10 games.

Russell Wilson is back on primetime as the Seattle Seahawks face the Philadelphia Eagles in Monday Night Football action in Week 12.

The Seahawks are coming off a 28-21 win over the Cardinals on Thursday Night Football and NFL betting lines have them installed as 5-point favorites against a floundering Eagles side that’s just 3-6-1.

We break down the NFL odds and bring you our best Seahawks vs. Eagles picks and predictions for Monday, November 30, with kickoff at 8:15 p.m. ET.

It’s expected to be a wet night at Lincoln Financial Field in Philadelphia with temperatures between 45 and 62 degrees, winds reaching up to 11 mph and a 97 percent chance of rain. Be sure to monitor the gametime conditions with our NFL weather info.

Backing Seattle and the Under has been very profitable in the head-to-head, with the Seahawks going 6-0 ATS in the last six meetings and the Under going 5-0 in the previous five. Find more NFL betting trends for Seahawks vs. Eagles.

Against the Spread (ATS) Pick

Seattle is coming off an impressive win over Arizona and gets to enjoy 10 days off as a reward. The Seahawks are just 2-3 SU in their last five games and 2-4 ATS in their previous six but it’s worth noting that those losses came against strong teams like the Rams, Cardinals (Week 7) and Bills.

The Eagles are far from a strong team, going just 1-5 ATS against teams outside their terrible, terrible division. Their offense has been largely to blame for their disastrous start to the year, mustering just 22 points per game and ranking 30th in the league in offensive DVOA, according to Football Outsiders. On the other hand, the Seahawks attack has been terrific, ranking second in the league with 31.8 ppg and fourth in offensive DVOA.

As anyone who follows football knows, a good quarterback is integral to a team’s success and the Seahawks have one of the best in the business in Wilson. The seven-time Pro-Bowler is having another MVP caliber season, completing 70.7 percent of his passes for 2,986 yards and 30 touchdowns through 10 games.

Philadelphia’s Carson Wentz has arguably been the worst starting QB in the NFL, putting up a pedestrian passer rating of 73.3, which ranks 31st in the league. Philly’s offense won’t be able to keep pace with Seattle in this one: take the Seahawks to win and cover.

The Seahawks’ high-flying offense and atrocious defense led to plenty of Overs early in the season but they’ve gone Under the total in their last two games. In those two contests, they held a pair of solid offenses in the Rams and Cardinals to just 351.5 yards and 22 points per game.

Now, the Seahawks take on a pathetic Philly team that has scored just 17 points in each of its past two games and is 4-0 to the Under in its previous four contests.

With the Eagles’ offensive struggles and wet and windy weather expected for Monday night, we’re leaning towards the Under. And if you’re a fan of head-to-head betting trends they’re leaning in the same direction, with the Under going 5-0 in the last five meetings—including two identical 17-9 Seattle wins last season (one during the wild-card game).

Use our NFL parlay calculator to create your own parlays and see their potential payouts.

Where Can I Bet on the NFL?

You can bet on NFL odds at every online and casino sportsbooks, including NFL moneylines, spreads, Over/Under totals and a ton of NFL prop odds. Head over to our best-suggested sportsbooks for the top spots to bet on NFL odds in your area.