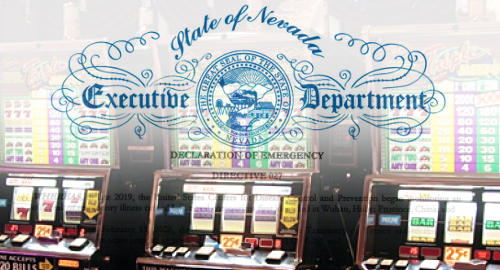 Nevada casino operators fear that they could be forced to close their venues a second time as the state struggles with a resurgence of COVID-19 infections.

On Thursday, Nevada Gov. Steve Sisolak ordered a number of the state’s ‘restricted’ gaming licensees – bars, pubs and other small venues that host a handful of electronic gaming machines but aren’t licensed to serve food to customers – to close their venues following a spike in COVID-19 infections in certain counties.

Under Sisolak’s Declaration of Emergency Directive 027, as of midnight Friday, restricted licensees “in a county with an Elevated Disease Transmission” – which includes Clark county, home to both Las Vegas and Reno – were ordered to close. The order will remain in effect until Sisolak orders otherwise.

All Nevada gaming venues were ordered closed in March as the pandemic took hold and the gaming sector’s reopening didn’t begin until June 4. But despite taking health & safety precautions, supplemented by Sisolak imposing a mandatory mask order for casino customers last month, the state’s COVID-19 infections have spiked, including a new daily record of 1,004 new cases on Thursday.

Nevada’s casino operators are now fearing they too will face pressure to shut down. While casinos have reportedly fared better than smaller venues on Nevada authorities’ safety compliance checks, other states have forced some of their major casinos to close as their respective COVID-19 infections soar. Nevada officials have so far declined comment on why casinos should be allowed to continue operating given the state’s concerns.

Sisolak’s order came the same day that Caesars Entertainment announced plans to reopen its Bally’s Las Vegas property on Thursday, July 23 at 10am. Caesars said the reopening of some of its other Vegas venues, including Caesars Palace, had been successful enough to warrant taking a chance on expanding its active operations.

Caesars CEO Tony Rodio said the company continued to see “solid customer interest in visiting Las Vegas this summer” and suggested that opening additional properties was a more responsible option than lifting the caps Caesars imposed on hotel occupancy at its other reopened casinos.