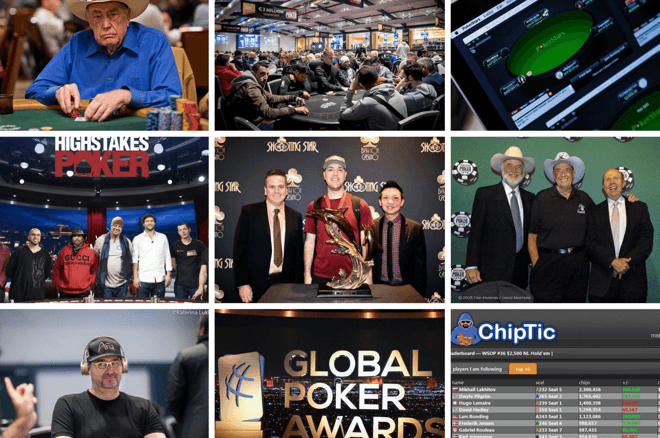 What a year it has been for poker. With huge stories such as Doug Polk vs. Daniel Negreanu, and the Galfond Challenge making all the headlines, there are some stories that you might have missed in the craziness of 2020.

The KO Series on partypoker is underway and you could win a $2,100 ticket thanks to KO Series SPINS

Doyle Taking No Chances with Coronavirus

Poker legend Doyle Brunson remains one of the most famous and revered players on the planet.

Back in March, Brunson said that despite being robbed at gun point five times, been stabbed, beaten cancer three times and survived three car wrecks “the Corona can’t touch me.”

just setting up my twttr

March was a crazy time for poker, with cancellations and postponements galore. One tournament that did take place was the Bay 101 Shooting Star $5,200 Main Event. However, with a field of ten returning for Day 3, the remaining players agreed to a ten-way chop.

That result meant Craig Varnell was crowned the winner, adding $159,710 along with the Bay 101 trophy to his WSOP bracelet and his WPT500 title.

Live poker was in short supply this year, including at the largest card room in Europe located at King’s Resort, Rozvadov. Home of the recent World Series of Poker Main Event final table won by Damian Salas, it’s been the site of other festivals including the WPT and partypoker MILLIONS.

PokerNews took a look at the King’s Resort all-time money list, counting down some of the top players who have played at the venue.

Hall of Famer Crandell Addington needs no introduction, and he wastes no time explaining all about the origins of the World Series of Poker, his history of playing alongside the legendary Doyle Brunson and how the WSOP evolve into the huge festival of poker it is today.

Trust us, this is an interview you must not miss this year!

Joey Ingram, Stephen Chidwick and Jamie Kerstetter all picked up awards at the 2nd Annual Global Poker Awards held in March 2020. The swanky ceremony was held to recognize players, media and industry professionals for their accomplishments in 2019.

Check out the full results and reaction from this year’s awards!

You might not be able to match his record of 15 WSOP bracelets, but you could certainly experience the life lived by Poker Brat Phil Hellmuth when he put his Las Vegas house up for sale back in June.

just setting up my twttr

For $430,000 you could live in the luxurious surroundings of Las Vegas Country Club.

How Does PokerStars Deal With Bots?

In April, PokerStars released a video explaining how they dealt with bots and other artificial intelligence (AI).

According to its Game Integrity department, PokerStars has a dedicated team whose sole job is to combat them, with sophisticated detection methods. The site believes it has the best bot detection in the industry.

Watch the video and see for yourself.

‘It Would Have Changed the Game’ — An Oral History of ChipTic

One of the most in-depth article series that PokerNews published this year is the Oral History of ChipTic. Launched at the 2012 World Series of Poker, it was supposed to revolutionize live poker, with players and fans able to interact with the chip counts and seat draws.

However, it proved to be a colossal failure. With first-hand accounts from ChipTic employees and WSOP tournament directors, read the shocking story for yourself!

The Return of High Stakes Poker

An early Christmas present this month was the relaunch of High Stakes Poker, almost a decade after it last aired.