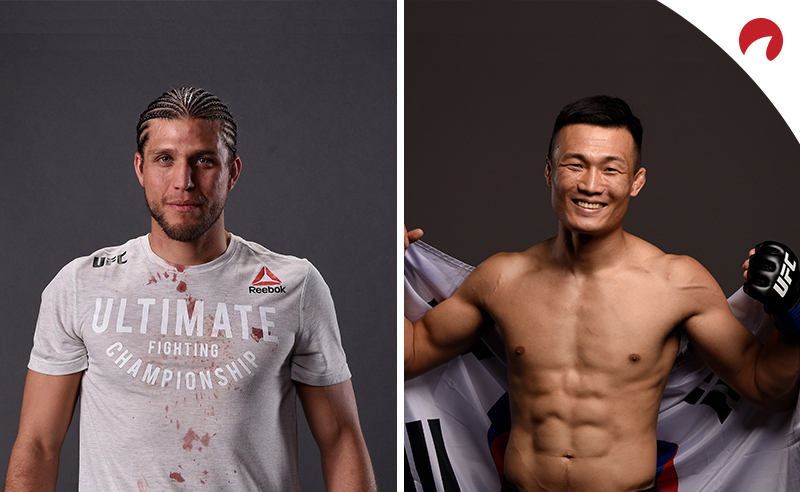 Featherweight champion Alexander Volkanovski’s next opponent may be decided this weekend in the UFC Fight Island 6 main event between Brian Ortega and Korean Zombie. These two have a beef to settle after Ortega slapped Chan Sung Jung’s translator at an event in March.

For the Brian Ortega vs Korean Zombie odds, it is the South Korean who is favored, with the American coming in as the underdog.

Both Ortega and Korean Zombie are former title challengers and the winner of this will likely be the No. 1 contender. We have a full preview and the UFC Fight Night: Ortega vs Korean Zombie odds, with the event once again at Yas Island (Fight Island) on Saturday, October 17.

This is the first time we are seeing Ortega since his doctor-stoppage loss to Max Holloway in December 2018. That was the first pro loss for “T-City” and it put an end to his five-fight streak of finishing opponents.

Meanwhile, the Korean Zombie made short work of his two opponents in 2019, scoring first-round knockouts over Renato Moicano and Frankie Edgar. Since returning to the Octagon after completing his mandatory military service for three years, Zombie is 3-1 with three first-round knockouts.

Online sportsbook Bovada has released the UFC Fight Night: Ortega vs Korean Zombie odds and has listed Jung as the favorite at -200 with Ortega coming back at +160. That means you would have to wager $200 to profit $100 with a Zombie win, while a $100 bet on Ortega would profit you $160. You can find out all your potential winnings with our sports betting calculator.

New to betting on the fights? Check out our UFC betting guide to get you in the action. Also, keep an eye on our UFC odds page for the latest up-to-date UFC betting lines.

As mentioned off the top, there is some bad blood between these two featherweight contenders that will be settled in the cage. Jay Park, an American rapper who is also the translator for the Korean Zombie (-200), did his job that included delivering some trash talk from Zombie to Ortega (+160). At UFC 248 in March, Ortega slapped Park in the crowd for the trash talk, a move that has angered Zombie.

The former women’s strawweight champion, Jessica “Bate Estaca” Andrade (-165) has left the division to go up to flyweight. Her debut in her new weight class comes against former flyweight title challenger Katlyn “Blonde Fighter” Chookagian (+135) in a fight that will definitely have title shot implications.

Following a successful UFC debut in July, Modestas “The Baltic Gladiator” Bukauskas (+240) looks to extend his seven-fight winning streak this weekend. To do so, he’ll have to knock off the scrappy Jimmy “The Brute” Crute (-310), who is coming off a first-round submission in February after suffering his first pro loss last September.

Claudio “Hannibal” Silva (+115) lays his lengthy 14-fight winning streak on the line as he also eyes his sixth win in the Octagon. He will look to continue his winning ways against fan favorite James “The James Krause” Krause (-145), who saw his six-fight winning streak snapped his last time out, though he’s given a pass as he took the fight on 24 hours’ notice.

Two bantamweights looking to find their footing in the UFC will look to build off the other’s loss. Thomas “Thominhas” Almeida (-140) got a big push off his 20-0 record but has stumbled in the top 10 of the division, dropping three of the last four. Meanwhile, Jonathan “Dragon” Martinez (+110) is 3-2 in the UFC after holding a 9-1 record before getting signed.