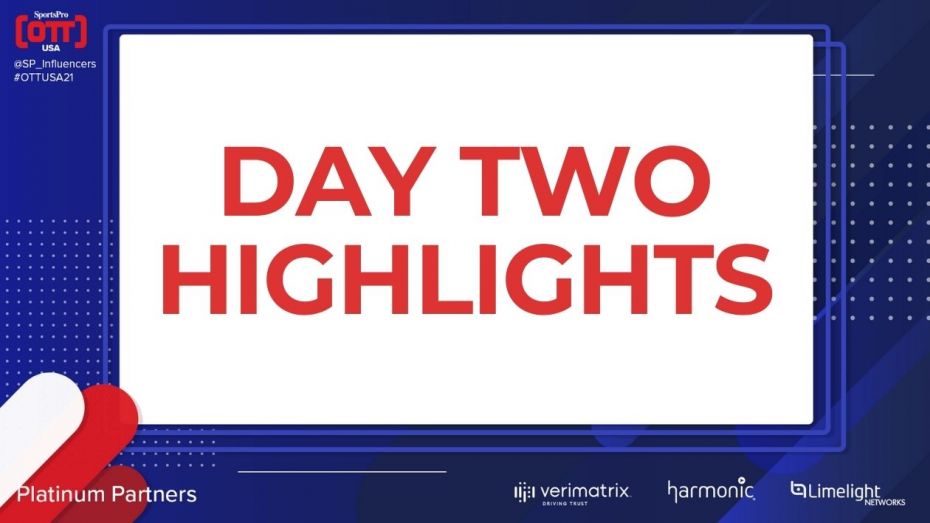 Executives from across the US sports broadcasting landscape convened once again for the second day of SportsPro’s OTT Summit USA, which welcomed speakers and guests from across the globe for another packed schedule of panel sessions, roundtables, tech showcases and networking huddles.

Representatives from the likes of ESPN, PGA Tour, Turner Sports, DraftKings, DAZN, World Surf League, LPGA, Sinclair, TikTok and the National Football League (NFL) took to the virtual stage to discuss everything from the art of original storytelling to connecting fans through gamification.

With day two now done and dusted, here’s our pick of the highlights.

There has been plenty of anticipation around the NFL’s next round of domestic media rights contracts, which NBC’s Jon Miller predicted during December’s SportsPro OTT Summit will be “the biggest television deal signed in sports”.

At least some of the negotiations looked like they were nearing an end last week, when Sports Business Journal (SBJ) reported that the NFL and Disney had agreed a new US$2.6 billion deal for the Monday night package, only for the league to deny the report.

Fortunately for us, ESPN’s Burke Magnus was on hand during the first session on day two to set the record straight. The Disney-owned broadcaster’s executive vice president of programming acquisitions and scheduling said that reports of a deal “were premature”, but expressed hope that a deal could be announced soon.

“We’re not done until you see that press release, which is coming at some point I hope.”

��️ ‘We’re not done until you see that press release’ As reports swirl around the NFL’s next rights deals, @espn’s Burke Magnus gives an update on the network’s rights negotiations with the league #OTTUSA21 pic.twitter.com/5ujcYDxnO4

“Creatives had to step up their game” when Covid-19 hit

It goes without saying that the pandemic has been difficult for everybody, but the Covid-19 crisis has posed particular headaches for those whose job is to produce live content and original programming.

With production teams restricted to working remotely and collaborating across multiple locations, producers have had to get a little more creative in the way they go about their business. Still, amid the adversity of recent months has also come opportunity.

In a session on the importance of original storytelling, DAZN’s Grant Best, the World Surf League’s Tim Greenberg and Pamela Duckworth, the head of Fubo Sports Network, were all in agreement that shooting studio shows and other projects during lockdown focused creative minds and encouraged production teams to think outside the box.

“We were doing two studio shows pre-pandemic – guests showing up, the whole kit and caboodle – and obviously we had to shut all that down,” recalled Duckworth. “So it made my team go back and everyone shot from their house. We did it all in the cloud.

“I think it was good for the creative’s brain to have to say, ‘how am I gonna pull this off now? How am I still gonna tell these great stories, keep the audience engaged? Because we’re doing this, we’re Skyping with all of these athletes.

“I think one of the other shining things that came out of the pandemic is we had better guests than we’d ever had before because it was so much easier for people. But yeah, [we’re] always looking for the silver lining and I think that’s what it was: creatives had to step up their game.”

��️ ‘The creatives had to step up their game’
Pamela Duckworth, head of Fubo Sports Network and original programming, on adapting content creation during the pandemic #OTTUSA21 pic.twitter.com/BVf3Qp1hDY

Like Duckworth, Melissa Lawton, Facebook’s head of sports production, noted the extent to which many sports organisations are now approaching content production differently. But for some, that shift has only happened because Covid-19 forced their hand.

According to Lawton, the job of convincing some “big entities” in sport to rethink their content output on Facebook before the pandemic felt a bit like “talking to the captain of The Titanic”, with certain organisations previously reluctant to change course. Once their ships struck Covid’s proverbial iceberg, however, all of a sudden many found themselves desperately rushing for the rescue of cloud-based remote production tools and new avenues for distribution.

“No one meant to hit the iceberg,” said Lawton, “but Covid happened and suddenly you’ve got all these captains of boats going, ‘okay, now we need cloud production, now we need to think alternatively to find out where the audiences are at, and we need to tell them where we are and what we’re doing.

��️ ‘We saw a 75% increase in live uploads from the end of 2019 to the end of 2020’ Melissa Lawton, @Facebook’s head of sports production, on how Covid-19 has changed attitudes towards remote production #OTTUSA21 pic.twitter.com/WO4XrJZxPA

Last year saw a growing number of partnerships formed between US media companies and gambling operators as broadcasters across the pond continued to look to drum up engagement through sports betting integrations.

One such deal was between Turner Sports and DraftKings, who in October entered into a multi-year agreement encompassing everything from customised content to betting odds and fantasy statistics.

Speaking during an in-depth session alongside DraftKings’ Ezra Kucharz, Will Funk of Turner Sports explained how betting now plays a central role in informing what sports content the company decides to go after.

“How a programme will resonate with bettors is a really important piece to our evaluation of something that we either want to acquire or something we might want to create,” said Funk, who is Turner’s executive vice president of sports partnerships and branded content.

“In that case we’ll have conversations with Ezra and say: ‘What do you think? How will this resonate with bettors? What is the history of this sport or these players?’ And they have a lot of data and analytics that will help us.

��️ ‘How a programme will resonate with bettors is a really important piece to our evaluation of something we want to acquire or create’
Will Funk, @TurnerSportsPR’ EVP of sports partnerships and branded content, on how gambling is impacting the network’s strategy #OTTUSA21 pic.twitter.com/mT2fRXpICd

For the pick of the coverage from day one, click here. Alternatively, sign up to watch every session from both days on-demand and here.