Graham Potter’s desire to play in a very expansive shape, gracefully passing the ball out from the back and building with little triangles into the final third, is far too naïve for games against the stronger Premier League outfits. They have conceded a combined 10 goals to Everton, Chelsea, and Manchester United this season.

In those encounters they conceded seven either from counter-attacks or set-pieces won from a counter-attack, while two others were from sloppy passes by centre-backs straight to the opposition. Liverpool will relish playing such an open team, with Diogo Jota, Roberto Firmino, and Sadio Mane pressing effectively in the final third to force those mistakes as Brighton try to build from the back.

Even if Brighton evade the press, their style of possession football means Liverpool can break forward at speed after a transition, cutting straight through the hosts. Mane in particular should be dangerous given that Kyle Lamptey, the club’s only natural right wing-back, is suspended after being sent off against Aston Villa. Bet on Liverpool to win by a big margin.

Everton’s alarming defensive record this season is caused by James Rodriguez being unable to defend adequately from the right, with his errors leading directly to four opposition goals. That’s why Carlo Ancelotti switched to a 3-4-3 for the 3-2 win at Fulham, although ultimately this just created problems in a different area.

Fulham scored twice from simple one-twos around the edge of the D, exposing what so often happens when a 3-4-3 is pinned back to become a 5-2-3; holes around and between the two-man midfield of Allan and Abdoulaye Doucoure were exposed. Leeds’ one-twos are particularly complex and well-choreographed, with wingers cutting into that space around the D via sharp combinations drilled in training.

However, Everton will also threaten. Their new formation means extra bodies out wide as wing-backs can push higher to support James and Richarlison, and here Leeds may suffer. In what promises to be an open game between two sides willing to counter and counter-counter, Everton are likely to outnumber the visitors on the flanks and get balls in to the in-form Dominic Calvert-Lewin. There will be lots of goals in this one. 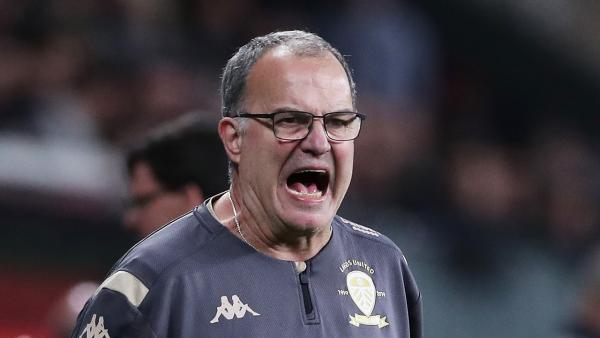 Ralph Hasenhuttl’s coaching makes Southampton a fine-tuned team capable of setting complex pressing traps and counter-attacking in pinpoint, pre-set rhythms, which is more or less the exact opposite to the broad-stroke style of the Manchester United manager. Ole Gunnar Solskjaer isn’t a details man, but rather expects his players to improvise and problem solve.

The hosts really should have the advantage, then. Saints will sit off United for long periods in a midblock, with Che Adams and Theo Walcott – leading a 4-4-2 – sitting in front of Fred and Scott McTominay in order to cut off the passing lanes into midfield. The United centre-backs will be reduced to aimless sideways possession, and as soon as the ball enters the Southampton half they will snap into an intelligent press.

On the counter, Hasenhuttl’s most prolific method of attack is for the two wingers to dip infield into the half-spaces, bursting forward in tandem to support the strikers. Moussa Djenepo and Stuart Armstrong should be able to exploit gaps left by Marcus Rashford and Juan Mata, attacking those over-worked United full-backs. I’m backing Saints to win.

Chelsea’s defensive record has improved dramatically, but that may simply be because of a very easy run of games; facing Spurs, the best counter-attacking team in the country, is a good test of whether Frank Lampard really has managed to patch up their issues in the transition. In games including the 3-3 draws with West Brom and Southampton, Chelsea’s lack of structure while in possession meant they were too fanned out to cover the spaces when countered.

Lampard has attempted to fix this by moving N’Golo Kante into a new defensive midfield position, plonking his best tackler into the hole between defence and midfield. Contrary to popular opinion, Kante has rarely played the Makelele role, only doing so a handful of times at the beginning of Antonio Conte’s reign prior to being tested here in June.

His direct opponent on Sunday is Harry Kane, who will drop into the number 10 space to launch Spurs’ counter-attacks after long periods of Chelsea possession – or at least that is Jose Mourinho’s plan. In each of their last two meetings, it is actually Lampard’s side who have been able to sit back and invite pressure, winning both games. Either way, the battle between Kane and Kante is likely to decide the outcome. Kane should get the upper hand, meaning a Tottenham win.