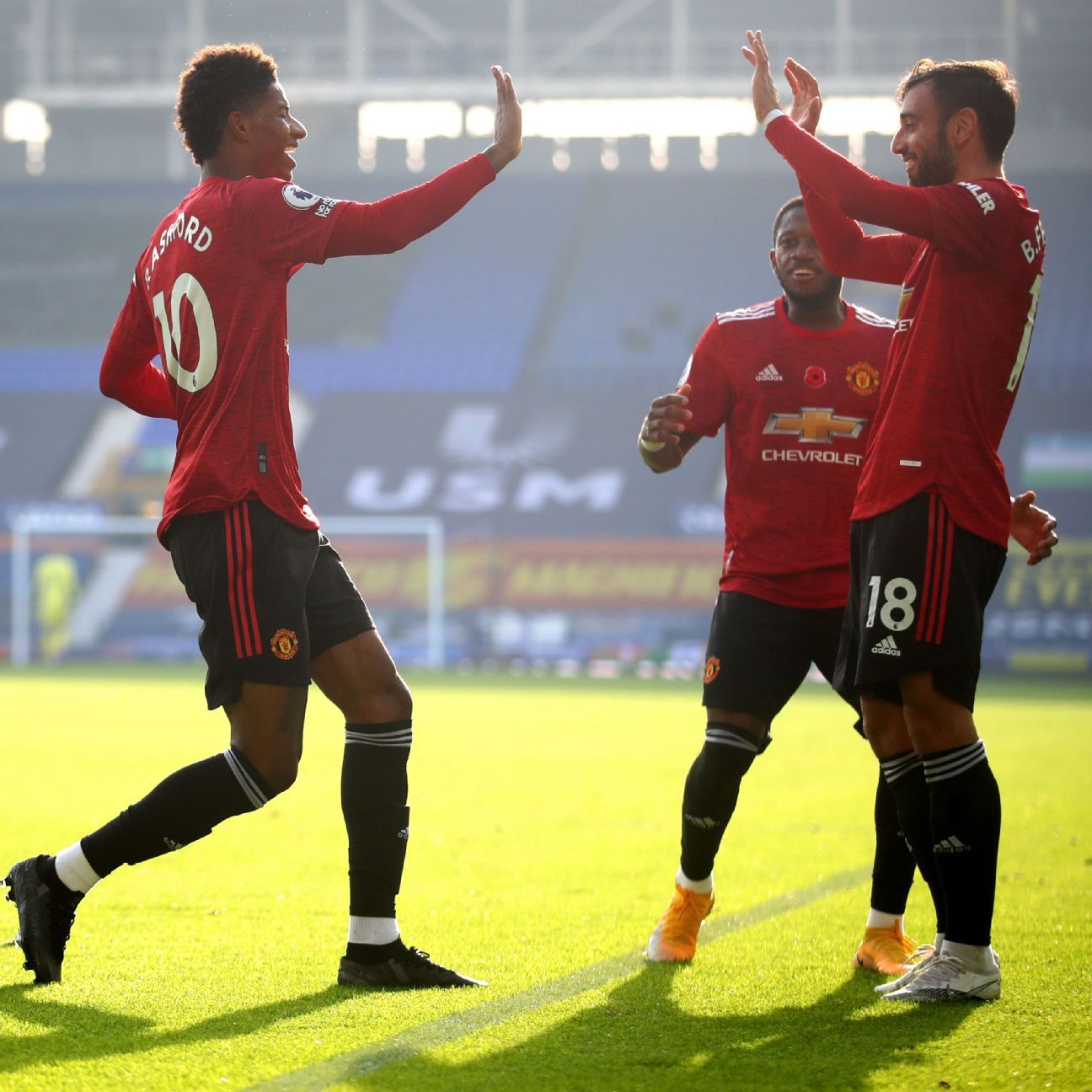 Manchester United manager Ole Gunnar Solskjaer avoided a third defeat this week as his side beat Everton 3-1 on Saturday, easing questions over his leadership.

It looked to be another bad day at the office for United after back-to-back defeats to Arsenal and Istanbul Basaksehir during the week when Everton opened the scoring through Bernard. However, United rallied with Bruno Fernandes finding the net twice and Edinson Cavani getting his first United goal to secure a win.

The victory comes at a crucial time for Solskjaer with Saturday’s win just his third in the Premier League and United in 13th position. While Solskjaer has said he has the support of the board, sources have told ESPN that Mauricio Pochettino and Julian Nagelsmann are both being monitored by the club as replacements.

Both sides had their chances in the opening 20 minutes but it was Bernard who broke the deadlock on 19 minutes after a long pass from Jordan Pickford was flicked on to him by Dominic Calvert-Lewin.

Bernard shuffled around Aaron Wan-Bissaka before directing a right-footed shot into the corer of David De Gea’s net.

However, their lead only lasted six minutes as United picked up the pace. Luke Shaw sent a cross into the box and Fernandes headed it home.

The Portugal international found the net again on 32 minutes when his cross into the box rebounded off the post and into the goal.

Initially, it appeared that Marcus Rashford had got a touch to the ball to guide it in but replays showed that all the plaudits should go to Fernandes.

United had a penalty shout on the hour mark when Pickford missed the ball and kicked Harry Maguire. However, VAR adjudicated that there was no foul.

The introduction of Alex Iwobi appeared to give Everton an injection and they enjoyed their most successful spell in the final 15 minutes but couldn’t translate the pressure into a goal.

Everton were caught on the counterattack on the 95 minutes when Fernandes launched into a run down the middle of the pitch. With Cavani to his left, he passed the ball to the striker who picked his spot and put the ball past Pickford for his first United goal.

“Most importantly for me as a No. 10 is serving my teammates, as I did in the end for Cavani,” Fernandes said after the game.

“I had the chance to shoot and look for the hat trick but I see him alone. And if Marcus can take the second goal, it is not a problem for me. Everyone needs to be a leader.”

Solskjaer was clearly angry after the match at the run of games United have been expected to play.

“We were set up to fail. They set up the boys to fail. We have been to Turkey Wednesday night, we’re playing Saturday lunchtime kick-off, it’s an absolute shambles,” he said.

“I cannot praise the boys enough for the character they have shown. Them boys deserve better than being thrown out here to fail today. Authorities set us up to fail.