Two more WCOOP titles were won over an important weekend of WCOOP action as one of the best poker players in the world was denied a record-equaling victory and another bagged his second WCOOP win. 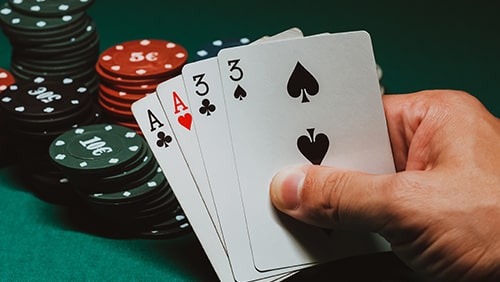 Hungarian player Andras Nemeth won $140,506 in taking down this PLO event, which had he won, Shaun Deeb would have equaled a long-standing record in WCOOP history.

The final day begun with Shaun Deeb, WCOOP legend, looking to clinch a ninth and record-levelling title, but he wasn’t the only one desperately chasing the title, and so the early orbits proved. The final table saw some stellar names battling it out in the famously swingy format, and it would be Deeb who left the part in 7th place, earning just $28,596 for his efforts rather than the moment of online poker history that he surely craved.

It was Laszlo Bujtas who had busted Deeb and the other Hungarian at the final table was on a roll when he busted Joao Vieira in 6th place, the Portuguese player busting with ace-ten against Bujtas’ ace-jack.

With five left, it looked like Bujtas had runway lights ahead of him, but with half of the chips, he lost a huge amount of his chips when he bluffed not once but twice, with his countryman doubling up twice through him.

With Finnish player ‘Aku1206’ and Russian ‘Us_Alex’ busting in 5th and 4th place respectively, it was Bujtas who busted in 3rd place, Nemeth’s double-suited ace-high outdrawing double-suited kings to reduce play to a heads-up battle for the title.

Richard Gryko, hailing from the United Kingdom, had a chance at victory as he flopped bottom set against Nemeth’s draw with a nut wrap and nut flush both possible. Nemeth hit the flush on the river to win the hand and take the title, and the latest massive WCOOP victory.

While Astedt began the action in fine style, winning a big double-up to propel himself into the lead at his table, others weren’t so fortunate, with Patrick Leonard departing virtually straight afterwards. When Sergei Koliakov bubbled the final table for $15,908, Christian Rudolph took the lead, but action was fast at the final table and the lead would soon change hands.

The first player to bust the final table was Ognyan Dimov, the Bulgarian player losing all his chips before Ukrainian player ‘Garrin4e’ departed in 8th place.

Manuel Ruivo had enjoyed a very busy start to the day, after tripling up, then dwindling before busting to Russian player Gleb Tremzin. Tremzin was rocketing up the leaderboard, but so was Astedt, the Swedish online poker legend busting more bounties than anyone else. The Swede had timed it brilliantly. Tremzin had it all to do to keep up with him, but after taking out four players in a row, including the aforementioned Christian Rudolph, it was time for the heads-up clash.

It didn’t take long for the heads-up battle to end and it was on an eight-nine-ten flop that all the chips went in. Tremzin, going for what would have been his fifth WCOOP title, had top pair, but Astedt held two pair with ten-nine and despite a sweat on the turn, sealed the deal with a blank on the river ending the contest.

A superb win for Astedt came at the expense of the toughest opponent at the final table, and sealed a massive result of over $200,000 including bounties. For the Russian Tremzin, it was a case of so near and yet so far, and he remains on four WCOOP titles, still an incredibly impressive achievement, one Astedt grows closer to after this latest confirmation of his phenomenal talent.