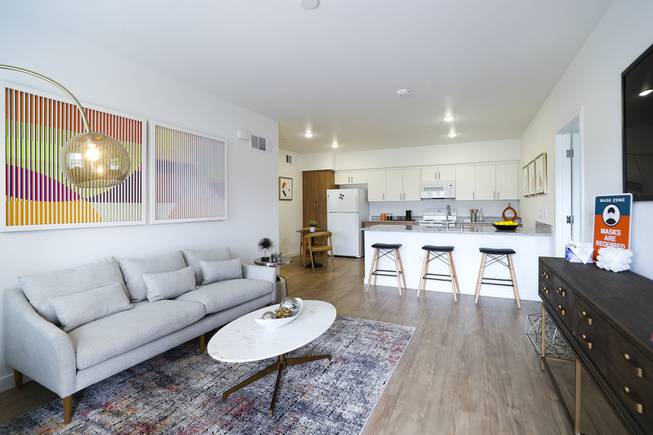 A living room inside a two-bedroom model is shown at the Showboat Park Apartments, Wednesday, March 10, 2021. 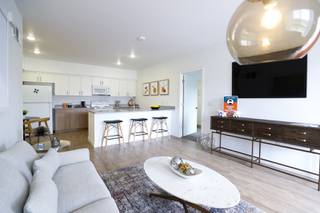 John Hunt grew up in the shadow of the old Showboat casino and got his first hotel job there in the early 1990s, working as a kitchen runner.

Some 30 years later, Hunt is now living at the site of the former resort as one of the first residents of the Showboat Park Apartments.

“I have a deep-seated love for the Showboat; my heart is there,” Hunt said. “The home I grew up in, at Eastern and Oakey, was a five-minute walk.”

The old casino was razed in 2006 and the patch of desert at Fremont and Atlantic streets remained empty until developer Amador “Chi Chi” Bengochea had the vision for Showboat Park.

Hunt, 55, moved into his apartment on Jan. 2, the first day residents were allowed in. He is among about 100 people who live at Showboat Park, which will eventually be a collection of 23 one- and two-story buildings on about 25 acres.

Ten of the buildings, including a 10,000-square-foot clubhouse with a kitchen and conference room, have been completed.

Later this year, there will be 344 apartments open at the complex, all with washers and dryers and private entrances, Bengochea said. The courtyard has a pool — though it’s not available for use because of the pandemic — basketball courts, a covered playground, and a grass soccer field.

The development will eventually have a 13,000-square-foot Terrible’s Market convenience store and a Jack in the Box restaurant, Bengochea said. He also hopes to add a medical clinic, something he said is sorely lacking in the area.

“The grocery store will be big. That’s a needed amenity, not only for our residents, but also for people in the area,” he said.

The project — which will cost about $40 million when complete — is Bengochea’s baby.

Bengochea, who graduated in 1980 from Bishop Gorman High School, said he usually stops by the development for an hour or two every day.

“I was told by a hundred people not to do this,” Bengochea said. “I was told rents wouldn’t be high enough, that we couldn’t build it for this much. But this is a project that my wife, Dorothy, and I really care about.”

As Bengochea walked the property recently, two women came up to say hello. They were friends from high school who noticed the buildings while driving through the area and wanted to see the development, he said.

Showboat has one-, two-, and three-bedroom apartments with monthly rents that start at under $1,000.

Jim Sparkman, who lives in the 2300 block of East Oakey Boulevard, across the street from the Showboat apartments, said he thinks it’s a positive thing for the neighborhood.

“Overall, I think it’s good to have more housing here. That was just a vacant lot before. They look like nice apartments and they’re well-lit, which is good,” Saprkman said. “We used to be able to see Mount Charleston, so that’s probably the only deterrent for us.”

Christina Walton, co-owner of Silver State Glass and Mirror, a short walk from the Showboat complex, said she thinks the apartments could spur more development in the area.

“I’m very excited to see the growth around the east part of Vegas,” Walton said. “The Showboat Apartments are a great addition, and we look forward to welcoming more to the community. Look at the development that the downtown community has seen. We’re an extension of that neighborhood; we hope more businesses are drawn to this side.”

Nothing is left of the old Showboat casino, save memories of dinner outings, boxing matches and its famous bowling alley, which regularly hosted nationally televised PBA Tour events. It opened in 1954 and was later rebranded as Castaways.

“I’ll always remember those days fondly,” Hunt said. “Living here has been great. I had never lived in a brand-new apartment before, so it’s an A-plus for me.”