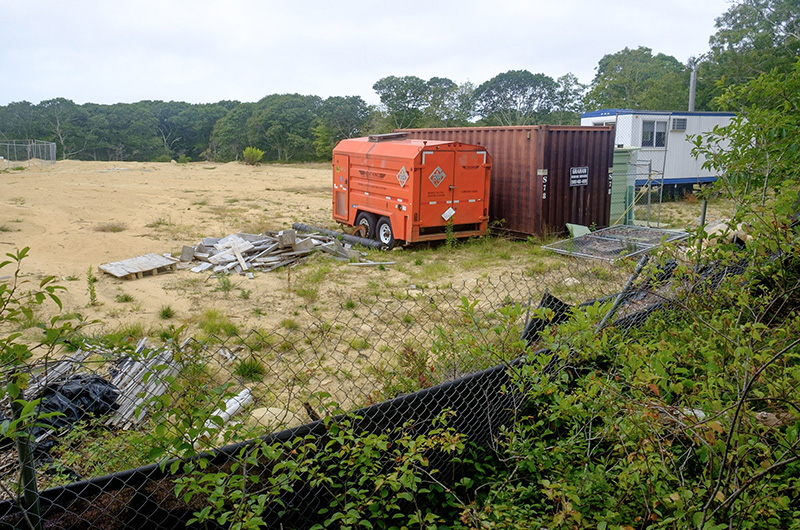 More than a year after a stunning U.S. District Court ruling effectively halted construction on a proposed Wampanoag bingo hall in tiny Aquinnah, the town and tribe are finally set to wrangle over the question of building permits once again — this time at the U.S. Court of Appeals for the First Circuit.

A virtual hearing has been scheduled for the morning of Monday, Sept. 14, when a panel of judges will hear oral arguments on the question of whether the Wampanoag Tribe of Gay Head (Aquinnah) needs to obtain state and local building permits before beginning construction on its proposed class II gaming facility. The presiding appellate court justices are the Hon. Juan R. Torruella, O. Rogeriee Thompson and William J. Kenyatta Jr.

Both sides have filed 50-plus page briefs, as well as a slate of supporting briefs — setting the stage for the long-awaited court clash. Placed on the calendar in late July, the hearing has been looming over the docket since the tribe filed its motion to appeal the district court ruling in the fall of 2019.

On Monday, the two sides will zero in on the scope of the Indian Regulatory Gaming Act (IGRA), with the tribe essentially arguing that IGRA supersedes the town’s local permitting authority — and the town countering that it does not. Also at play are tangled procedural issues regarding the scope and timeliness of the district court’s amended final judgment, among other issues.

Representing the tribe is the Arizona-based attorney Scott David Crowell, who will be presenting oral arguments before the appellate court on Monday. Also listed on their brief is attorney Lael Echo Hawk.

The town has retained William Jay, a D.C-based litigator with the firm Goodwin, to argue on their behalf before the appellate court. Attorneys Douglas Kline, town counsel Ron Rappaport, and Boston attorney Felicia Ellsworth, who is representing the Aquinnah/Gay Head Community Association, are also listed on the briefs.

The tribe is framing the building permit issue as an existential threat to its sovereignty, arguing in the strongest language possible that the district court’s ruling could have lasting implications for tribal development.

“The [ruling], if allowed to stand, will eviscerate the United States’ and Tribe’s jurisdiction over the Tribe’s Indian lands, devastating the Tribe’s ability to generate employment opportunities for its Tribal members and the community, and its ability to generate governmental revenue from gaming, which revenue is desperately needed in order for the Tribe to fulfill Congress’ intended goals of promoting tribal economic development, self-sufficiency, and strong tribal government,” the tribe’s principal brief reads in part.

The National Congress of American Indians has filed a support brief on the tribe’s behalf.

The town has taken a different tack, arguing that the district court ruling should be upheld because IGRA only covers laws “integral to gaming,” leaving in place the town’s ability to regulate aspects of the bingo hall unrelated to gaming — an issue it says the tribe never appealed in the first place.

“The Tribe could have raised the permitting issue in the first appeal, but it chose not to do so; as a result, the District Court’s unappealed decision on the permitting issue has become law of the case. The Tribe’s various attempts to evade its forfeiture are unavailing,” the town’s principal brief says. “The Town’s permitting rules do not regulate any activities that are ‘integral to gaming’ — the permitting rules are generally applicable to all construction projects in the Town and are designed to protect public health, safety, and the natural environment. IGRA therefore did not repeal the Town’s permitting jurisdiction.” Both sides cite the 2006 case Narragansett v. State of Rhode Island as precedent, but take fundamentally different stances on the crux of the case — whether IGRA preempts state and local permitting authority. The decision, the tribe argues, could have sweeping national implications.

“The [ruling], if allowed to stand, will deprive the Tribe of those rights and privileges which IGRA affords other Indian tribes, and will destabilize the jurisdictional structure of Indian gaming throughout the United States,” the tribe’s brief reads.

Courtrooms — including the U.S. Court of Appeals — have become a familiar meeting place for the town and tribe over the past three years, as the prospect of a gaming facility on land within the town has deeply divided the two sides and caused a series of seemingly ceaseless legal battles.

The most recent legal dispute began in early 2019, when the tribe rapidly cleared approximately four acres of land it owns off of Black Brook Road and State Road in Aquinnah. Shortly thereafter, the tribe announced that it would be constructing a 10,000 square foot gaming facility, with approximately 250 electronic games as well as food service.

But the town — one of the smallest in Massachusetts and situated at the most remote and least developed corner of the Island — immediately intervened, referring the project to the Martha’s Vineyard Commission for review and filing a request with the federal U.S. District Court to issue an amended final judgment that would acknowledge the tribe’s right to gaming, but also require it to obtain local and state building permits before construction.

After a court hearing before the Hon. Dennis Saylor 4th, the district court agreed. The commission — a state-chartered planning agency with broad powers to review developments — denied the project on the grounds that they did not have sufficient information. The tribe did not participate in the review process.

In the appeal, the commission has filed an amicus brief on the side of the town, contending that they have jurisdiction to review the non-gaming aspects of the project. The tribe has filed a brief countering those claims.

Meanwhile, construction on the project has ground to a halt.

The site has lain dormant for nearly an entire year, fenced-off from the road and strewn with a spattering of “no trespassing” signs. Black mesh netting covers part of the chicken wire. And an oval-shaped fence outlines the location of the proposed bingo hall, near a grouping of what appear to be temporary construction trailers.

The Wampanoag tribe has approximately 1,200 active members, according to its website — around 300 of whom live on-Island. Relations between the town and tribe have cooled dramatically since the bingo hall litigation began. While the two parties remain inextricably connected, with tribal members serving as town administrator, chief of police and on the town board of selectmen, many of those tribe members have expressed vociferous concern about the gaming development.

It remains unclear what impact the pandemic has had on the tribe’s financing and interest in completing the project.

In the fall of 2018, the tribe announced a $10 million partnership with Global Gaming Solutions — an arm of the Chickasaw Nation related to casino, resort and gaming development. Tribal chairwoman Cheryl Andrews-Maltais did not reply to requests from the Gazette for comment this week, sent by text message and email.

The tribe has asserted that it would steadfastly defend in court its right to build the facility without interference from the town. And both the town and commission have stated they will defend their jurisdiction on the question of local review.

Most of the principal players in the run-up to Monday’s hearing are familiar from the last time the town and tribe met in the U.S. Court of Appeals, when the town sued the tribe over its right to construct a class II gaming facility on tribal land within the town.

Mr. Crowell and Mr. Rappaport argued the 2017 case for the two sides before the appellate court.

Two of the three judges slated for Monday — Mr. Kayatta and Mr. Torruella — were on the panel that ruled in favor of the tribe, reversing Judge Saylor’s decision in 2017. A majority decision by the three-judge appellate court panel is required to reverse a district court ruling.

The hearing is scheduled for 9:30 a.m. on Monday. Each side will have 15 minutes to present arguments.