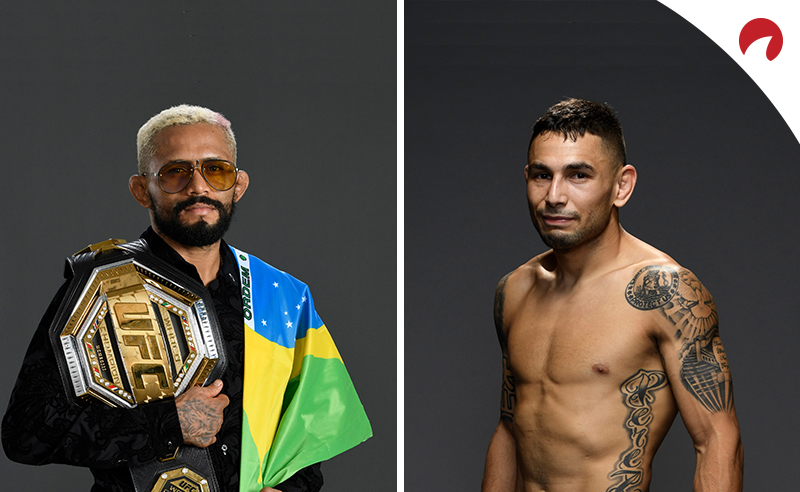 The first pay-per-view card on American soil since August is set for this weekend as both the men’s and women’s flyweight titles will be on the line at the top of the bill for UFC 255. For the men, Deiveson Figueiredo takes on Alex Perez, while the women’s side has Valentina Shevchenko defending vs Jennifer Maia.

The event is taking place on Saturday, November 21, at the UFC Apex Performance Center. In the main event, Figueiredo defends his title against Perez, while in the co-main, Shevchenko looks to hold on to her belt against Maia. We have a full event betting preview, UFC predictions and the UFC 255 odds right here.

Online sportsbook Bovada has released UFC 255 odds and Figueiredo is the sizable -300 favorite in the main event with Perez coming back as a +230 underdog. This means you would have to wager $300 to profit $100 with a Figueiredo win, while a $100 bet on Perez would profit you $230 if he won.

After a controversial victory to win the title in February, Figueiredo left no question about the outcome in his rematch with Joseph Benavidez on Fight Island, scoring a first-round submission in dominant fashion for his fourth straight win.

Also looking to grab a fourth win in a row is Perez, who got into this title fight after Cody Garbrandt pulled out with an injury. That doesn’t mean Alex is not worthy of this championship fight – his only loss over his last 12 bouts came against Benavidez in 2018.

A quick look at the co-main UFC 255 betting odds and we see that current champion Valentina Shevchenko is a massive -1800 favorite with challenger Jennifer Maia coming back at +850.

As you can see from the UFC 255 betting odds above, the biggest favorite on the cards is Shevchenko -1800 vs Maia +850. Meanwhile, the tightest UFC 255 betting line is in the welterweight division between Mike Perry at -140 vs Tim Means at +110.

New to betting on the fights? Check out our UFC betting guide to get you in the action. Also, keep an eye on our UFC odds page for the latest up-to-date UFC 255 betting odds.

Without further ado, here are my UFC best bets for UFC 255: Figueirdo vs Perez.

The flyweight division appeared to be on life-support when former champ Demetrious Johnson was traded to ONE FC for Ben Askren, then Henry Cejudo vacated the division to go up to bantamweight. However, Figueiredo (-300) brought eyes to the division with his power while up-and-comers like Perez (+230) pose real threats in an evolving division.

Perhaps the most talented women’s mixed martial artist, Valentina “Bullet” Shevchenko (-1800) looks to make her fourth title defense and extend her five-fight winning streak. Aiming to steal the hype is Jennifer Maia (+850), who is coming off a first-round submission over Joanna Calderwood in August. As mentioned above, this is the largest UFC 255 betting line on the card.

This prediction is one of my two UFC best bets of the card.

Two men looking for consecutive wins for the first time in many years meet in the middle of the main card. Mike “Platinum” Perry (-140) hasn’t had two wins in a row since 2017, going 3-5 since then, while Tim “The Dirty Bird” Means (+110) hasn’t won back-to-back fights since 2016 and has gone 4-5 with a no contest over that span.

This prediction is my second UFC best bet of the card.

It has been an active year for Katlyn “Blonde Fighter” Chookagian (+210) as she makes her fourth walk to the Octagon in 2020, but she is 1-2 in her previous three fights. Meanwhile, Cynthia Calvillo (-270) looks to build off a successful flyweight debut in June in which she beat former title challenger Jessica Eye.

A rematch from nearly a year ago to the day has Shogun Rua (-175) and Paul “Bearjew” Craig (+145) looking to determine a clear winner after their split draw. Rua is 2-0-1 in his last three fights and most recently scored a split-decision win over Antonio Rogerio Nogueira in July. Craig sports the same record in his last three and is coming off a first-round submission win in July.