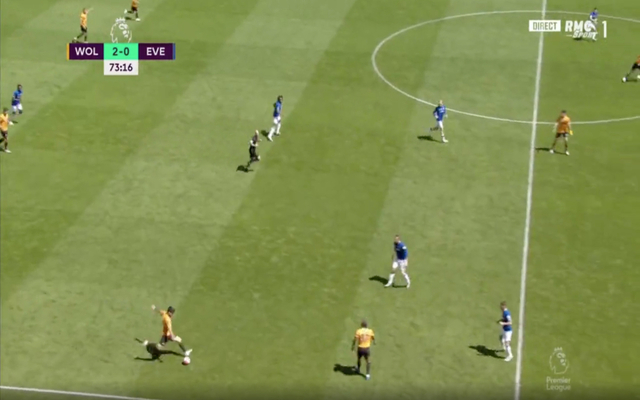 In the 73rd minute of Wolves’ Premier League clash against Everton, Ruben Neves comfortably thwarted skilful Samba star Bernard’s attempt at a roulette to win the ball back for the Midlands outfit.

The 23-year-old carried the ball forward confidently before looking up and launching a pinpoint long-range pass cross-field and into Diogo Jota’s path.

Jota made no mistake as he expertly controlled the ball before firing it into the near post corner from a tight angle.

According to the Sun, Jurgen Klopp is an admirer of Neves and wants the £50m-rated maestro to freshen up Liverpool’s midfield ranks.

Take a look at Wolves’ third of the game below:

Rúben Neves’ game summed up in a mere 20 second clip. He wins the ball back tenaciously, lifts his head up, and splits the entire Everton team wide open with a sumptuous pass, finished spectacularly by his compatriot Diogo Jota. pic.twitter.com/c9caz9c6KF

A fine performance against Liverpool’s local rivals is as good an acid test as Neves can get.