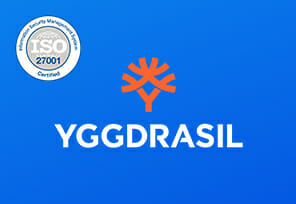 Yggdrasil, one of the industry’s leading publishers of online gambling content, has received official ISO/IEC 27001 certification. The certification is proof of the developer’s commitment to information security standards.

Receiving the certification means that a level of information security standards has been established, ensuring best practices in this discipline. Thanks to the certification, the developer will be able to expand into new global markets as many World Lottery Association members are using the 27001 certification as a regulatory benchmark. The supplier’s YG Masters distribution program is growing and ensuring data protection and information security is an important step for the company.

Representatives from Yggdrasil, which recently provided content to Aspire Global, say that they are very proud to receive the certification and that it is another step forward. They say that they will continue providing dynamic and immersive gaming content.

Fredrik Elmqvist, CEO at Yggdrasil, said: “Receiving our ISO certification is something we are very proud of and rightfully so. We have been through a rigorous certification process to ensure compliance is held to the highest regard, which is something we pride ourselves on, and we are committed to continuous improvements in security standards.

“It is yet another feather in our cap as we continue to provide dynamic, immersive gaming experiences for players all over the globe, while also ensuring YG Masters continues to grow in a secure environment.”

More About the Provider

Yggdrasil was founded in 2013 and during its years in the iGaming industry became one of the leading providers of superior online gaming solutions for iGaming operators. It operates within the regulated remote gambling industry and is fully committed to fulfilling the licensing requirements of the licensing jurisdictions. The company holds licenses from the United Kingdom Gambling Commission, Malta Gaming Authority and the Romanian regulator (ONJN). They received the first license back in 2013 and in 2015 the company reached a milestone by releasing its in-game promotional tool Boost™.

The success of the company was recognized many times. It managed to win Innovation in RNG Casino Supplier Award at the EGR Awards in 2019 and 2018, Innovator of the Year award at the International Gaming Awards in 2018 and again in 2019.